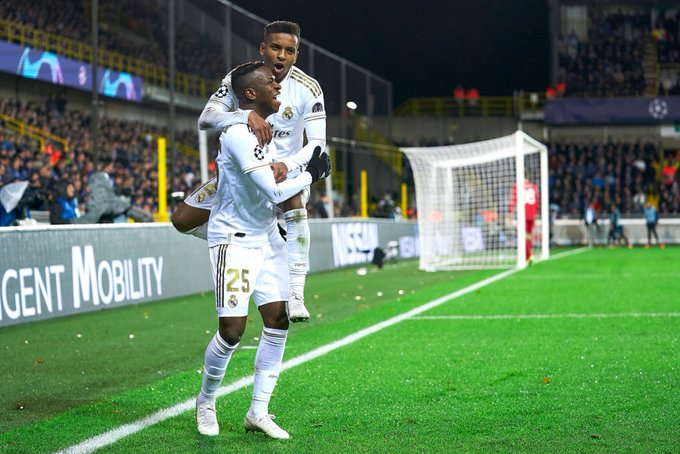 FC Barcelona have dominated Spanish football over the past 15 years – winning La Liga on 10 occasions and the Champions League four times during the same period.

The Catalan club have been praised for their production of players through their youth academy – Lionel Messi, Xavi, Andres Iniesta, Carles Puyol and Gerard Pique among many others.

However, production out of La Masia has slowed down in recent years, with the first team spending significant sums bringing players into the club – Philippe Coutinho, Ousmane Dembele, Neymar, Luis Suarez and Malcom all among them.

Buying players for significant sums has been something Real Madrid have been doing all millennium, but the world football giants have started going down a different route in recent years.

Over the past couple of seasons the club hasn’t been solely reliant on a number of numerous established names, but rather, bringing in a number of highly-rated teenagers too.

Yes, Eden Hazard and Thibaut Courtois have both arrived, but head coach Zinedine Zidane seems to have a plan for the long-term future. Brazilian teenagers Vinicius Junior and Rodrygo may have arrived with hefty price tags for their age but both featured in numerous La Liga matches during the opening 27 matches of the 2019-20 campaign prior to its suspension.

21-year-old Federico Valverde was starting to establish himself in the centre of their midfield this season, having previously gained a year’s experience in the top flight with Deportivo La Coruna in 2017-18.

Brahim Diaz is only a year younger and was handed a couple of appearances under the French coach too. The Spanish midfielder has a number of tricks and having previously been signed by Manchester City, much is expected of the youngster over the coming years.

Zidane, or whoever is in charge of Real Madrid over the coming seasons, will have to make a number of changes as their first team is full of a number of ageing stars. Stars such as Sergio Ramos (34), Luka Modric (34), Karim Benzema (32) and Marcelo (32) don’t have too many years ago of them, whilst 30-year-old Gareth Bale has been blighted by injuries during his team at the Santiago Bernabeu Stadium.

One player in particular who could have the weight of the world on his shoulders in the coming years is 21-year-old Martin Odegaard. The Norwegian international was signed by the Spanish giants as a 17-year-old back in 2015, having already made his senior international debut even before his move to Spain. The attacking midfielder has since spent the majority of his time out on loan – at Heerenveen, Vitesse and Real Sociedad. He particularly impressed with the latter, with many thinking he’ll be part of Zinedine Zidane’s first team squad as early as next season, despite initially being sent out on a two-year loan with the Basque club.

With Raphel Varane, Ferland Mendy and Eder Militao all below the age of 25 themselves, there’s plenty of players already in the Real Madrid squad with a number of years ahead of them for the coaches to build around.

Rivals Barcelona have an ageing squad of their own; Lionel Messi, Luis Suarez and Gerard Pique among them. Could Real Madrid take advantage and start to dominate Spanish football once again in the coming years? Only time will tell…