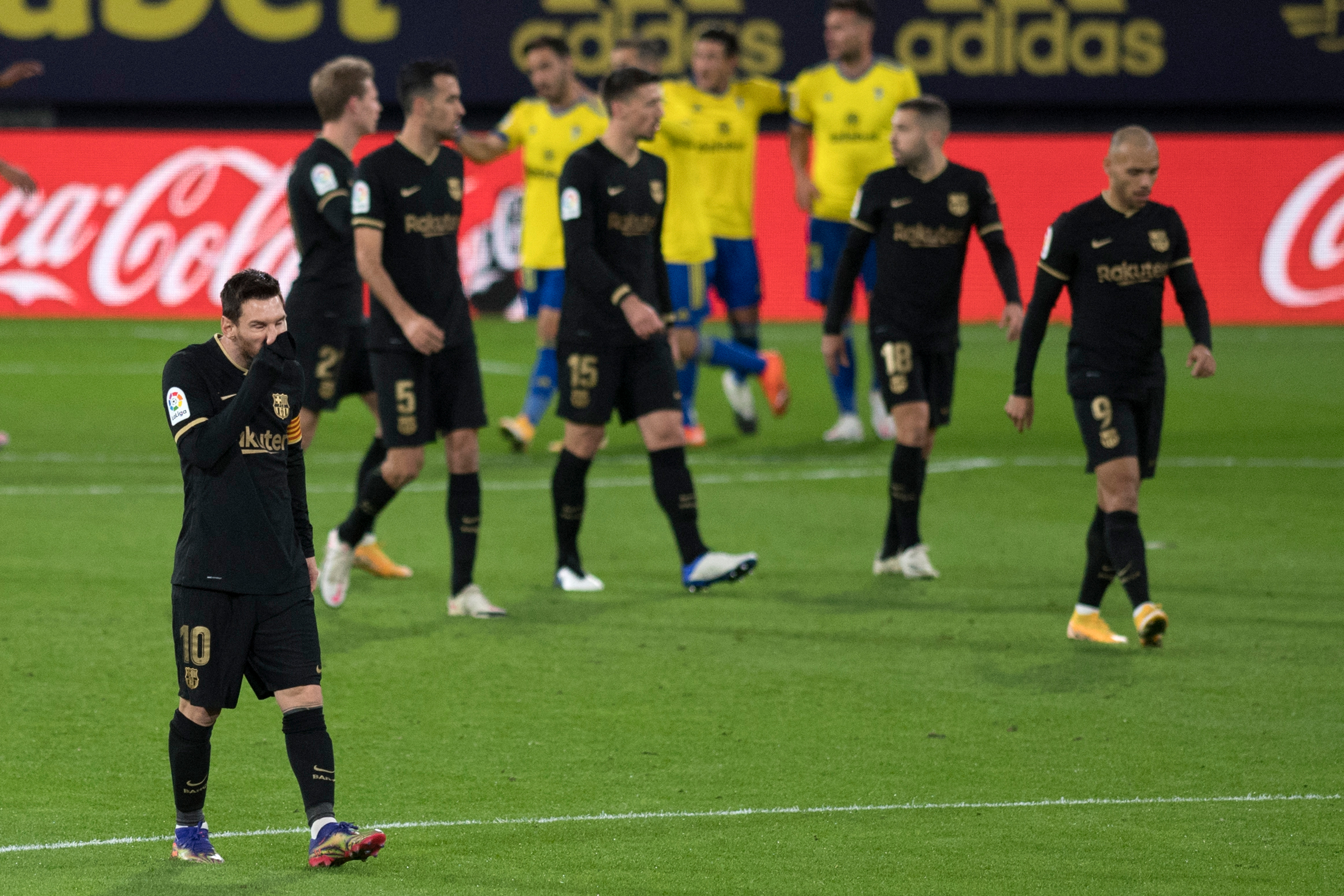 Barcelona’s dismal start to the La Liga season continued on Saturday evening as they suffered a shock 2-1 defeat to Cadiz away from home. The Blaugrana have experienced a tough campaign in the Spanish top-flight and they succumbed to a fourth defeat of the season at the Estadio Ramon de Carranza.

The Catalan giants handed Cadiz with the lead after just eight minutes on the clock. Marc-Andre ter Stegen did splendidly well to prevent Oscar Mingueza from scoring an own goal, but Alvaro Gimenez was on guard to tap home from the rebound.

Ronald Koeman’s side thereafter dominated the proceedings, but for all their efforts, it was an own goal from Pedro Alcala which put them level in the 57th minute. The centre-back made a complete mess of the cross from Jordi Alba.

Just when it seemed that the Blaugrana could go on to win the game, some comical defending put them 2-1 behind in the 63rd minute. Both Clement Lenglet and Ter Stegen could not clear the ball from Alba’s throw and that saw Negredo, who had just come onto the pitch, score for the hosts in an unguarded net after evading the challenge from Frenkie de Jong.

With the defeat, the Blaugrana remain seventh on the table, but their La Liga title hopes have taken a huge hit as they are already a staggering 12 points behind leaders Atletico Madrid after just 10 games into the campaign.

Cadiz, on the other hand, have defied the odds right from the start of the season. They were one of the favourites to get relegated ahead of their first top-flight season in 15 years, but they currently sit comfortably in fifth with 18 points, seven ahead of the drop zone.

Cadiz’s fairytale season: The newly promoted outfit have had a fairytale beginning in their first La Liga campaign since 2005. The club have almost picked up a victory in every other game and they have come up with some victories which no one would have predicted at the start of the season. Alvaro Cervera’s side registered a shock 1-0 win at Real Madrid in October and they have coupled that by beating the Blaugrana by a 2-1 scoreline in their own stadium. While they pounced on the Blaugrana’s defensive mistakes, they were also able to show immense levels of concentration at the back, having managed just 17 percent of the possession.

Ronald Koeman’s Barcelona future: The Blaugrana have experienced their worst La Liga start in over 30 years after the dismal result against Cadiz on the road. That is bound to put the pressure directly on Ronald Koeman, who has been unable to change the club’s league fortunes during the first half of the campaign. The Blaugrana have fallen behind in six league games this term and out of those, they have been on the losing side on four occasions. This is definitely a huge cause for concern and Koeman’s position could be under immense threat, should the club suffer another setback before the turn of the year.

Barcelona’s title ambition in tatters: The Catalan giants had a poor end to the previous season as their inconsistent league form saw Real Madrid pip them to the title while they were ousted from the Champions League after an embarrassing 8-2 defeat to Bayern Munich in the quarter-final. They started the current season with back-to-back wins, but have since stumbled with two victories from the next eight games. In the same period, Atletico have hit top form and a run of seven successive victories has put them at the top of the standings. The Blaugrana are now 12 points adrift of Atletico and it would require a stunning and an unexpected turnaround for them to win the title. The club previously went two seasons without winning the La Liga crown between 2006 and 2008.