Barcelona visited Sevilla, needing a win to keep their lead at the top of the table intact. Sevilla also needed three points to keep their Champions League spot in hand. 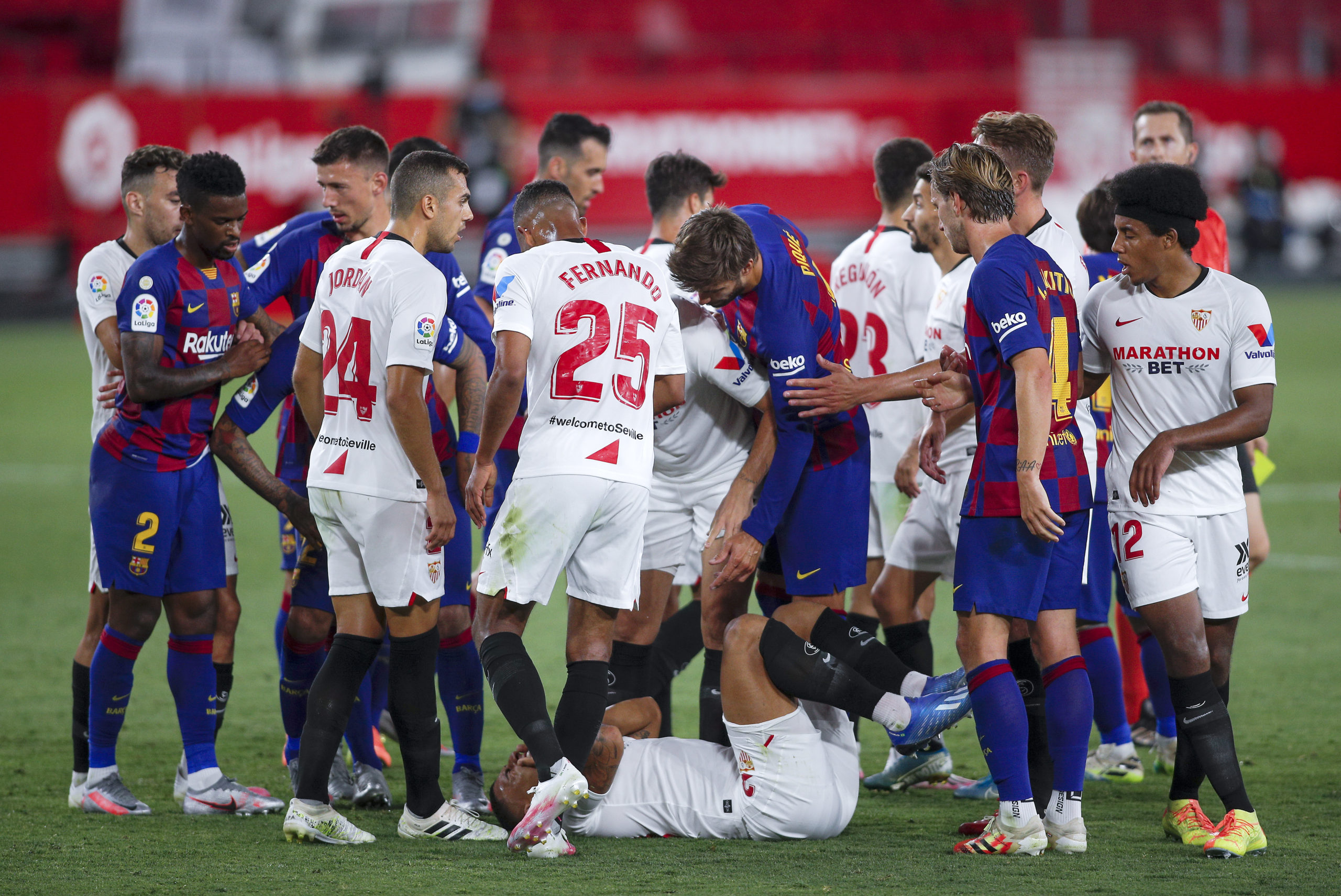 Sevilla had the first major chance in the 11th minute through Koundé, who received the ball on the edge of a box after a free-kick was headed to him. The youngster took it down and tried to drive it into the bottom corner, but he missed narrowly wide.

10 minutes later, Messi won a free-kick on the edge of the box. He took it as well, and it was heading for the goal, but Koundé leaped up at the post, and tipped it over.

Sevilla were much better in the second half. They had a massive chance in the 55th minute, when Navas took a free-kick quickly to Ocampos, who absolutely hammered it from a tight angle, but ter Stegen made a strong save to keep things level.

A minute later, ter Stegen was called into action once again, when Munir had a hit after he was played through down the left.

Barcelona had a big chance in the 88th minute when Alba found Suárez all alone in the box, but the striker failed to hit the target.

Sevilla had the last chance in the 91st minute when the ball fell to Reguilón six yards away from goal, but the full-back only managed to hit it straight at the Barcelona keeper.

So, an exciting affair at the top of the table ended in a goalless draw.

Sevilla were set up to be very compact. They minimised the space between their defence and midfield, and relied on Fernando and Jordán and to make lots of interceptions, while also depriving Messi of any pockets of space to operate in. In attack, they looked to send their full-backs up the pitch, and then deliver crosses into the box. In the second half, Sevilla switched to a back 3 in order to contain Suárez better.

Barcelona looked to play down the wings, and they also pressed high when they lost the ball. They also deployed a 4-4-2, sending Vidal and Brathwaite to the two wings. Messi played just behind Suárez up front, hoping to find spaces in midfield.

Fernando vs Suárez – The Brazilian followed Suárez pretty much everywhere, probably even to the Barcelona dressing room at half-time.. The Uruguayan striker didn’t have an inch to work with, and therefore had little impact on the game.

Tomáš Vaclík – Made a few poor passes early on, but was solid thereafter, as he made quite a few saves. 6.75

Jesús Navas – Yet another industrious performance from the Sevilla captain down the right. He was solid at the back, and supported his side well up front. 7.25

Jules Koundé – Brilliant at the back, as he made a lot of blocks and clearances, especially in the air. 7.75

Sergio Reguilón – Absolutely solid in defence down the left. Didn’t go forward too often, but he had a glorious chance in the dying stages of the match, which he squandered. 6.75

Joan Jordán – Brilliant in holding midfield, as he made a lot of tackles and helped Fernando in keeping Messi quiet. 7.5

Fernando – Like Jordán, he was great in defensive midfield, making an array of interceptions and challenge, as he screened the defence well, and kept Messi in check. Also played at centre-back for a while, where he was solid in keeping Suárez contained, so much so that the Uruguayan will probably have nightmares of him in the upcoming days. 8.5

Óliver Torres – Failed to have any impact in midfield. 4.75

Lucas Ocampos – Sevilla’s most potent attacking threat. He gave ter Stegen one or two things to worry about, but just failed to score. 6.25

Luuk de Jong – Tried his best to make things happen up front, but failed to do too much. 5.25

Munir El Haddadi – Worked hard defensively, as he tried to keep Semedo in check. Didn’t have too much to work with in attack. 6

Éver Banega – Brilliant after coming on, as he pulled the strings from midfield and injected a lot of life into his side’s attacks. 7

Suso – Decent down the right, but he couldn’t make too much happen. 5.5

Youssef En-Nesyri – Failed to have any impact up front. 4.75

Nemanja Gudelj – Decent in midfield, but had no impact in attack. 5.5

Team – Sevilla put in a great shift in this match. They weathered the storm for the first half-hour, and then started getting better. Bar Messi’s free-kicks, they let nothing trouble their goal. The hosts created a few good chances too, and might well have won it in the end. 7.25

Marc-André ter Stegen – Made a lot of major saves to preserve his clean sheet. Earned the point for his side. 8.25

Nélson Semedo – Looked good down the right. He was solid defensively, and quite threatening up front too, where his crosses were decent. 7

Gerard Piqué – Solid at the back, as he made a lot of important challenges and blocks. Even went forward to try to make things happen. 7.25

Jordi Alba – Decent down the left, where he defended well, and went forward at times too. Not his classical attacking performance, though. 6.5

Arturo Vidal – Alright in midfield, but he failed to do too much. 5

Sergio Busquets – Absolutely solid in defensive midfield, as he made a ton of recoveries in his efforts to screen the defence in the first half. Rather quiet in the second, but he was good. 6.5

Ivan Rakitić – Created one or two chances early on, but he was rather quiet for most of the match. 5.75

Martin Braithwaite – Failed to have any impact on the match, as he looked rather lost. 3.5

Lionel Messi – Very quiet throughout the match. The only real chances he had were through his free-kicks. Bar that, he couldn’t do anything. 4.75

Luis Suárez – Had no impact on the match bar one chance. Apart from that, he was being followed by Fernando everywhere. 4

Arthur Melo – Didn’t make too much happen after coming on, but his distribution was good.. 5.5

Team – Barcelona looked very threatening early on. But after the first cooling break, the match started going away from them. Setién’s substitutes were absolutely and utterly impact-less, and he should count himself lucky for not losing this match. If Barcelona want to win the title, they have a lot to improve on. 5.25

José Luis González González had an easy first half until the last minute, when everyone gathered to discuss Carlos’ challenge on Suárez with an unhealthy amount of interest. Two people went into the book, but it should have been 4 at least. He was decent thereafter though. 6.25

The Title Race – We have Sevilla to thank for absolutely opening the title race up. If Real win their match, the top 2 will be level on points with 8 matches to go. The last sprint is shaping up to be extremely exciting.

Sevilla stay 3rd, and have a 3 point buffer to Atlético Madrid who are a place below them.

Barcelona stay at the top, but they have only 3 points between themselves and Real, who could go level with them after their match against Sociedad.