Madrid hosted Eibar at the Alfredo Di Stéfano – the Santiago Bernabéu is undergoing some renovation. The visitors are in the midst of a relegation battle, and desperately needed points to create clear daylight between themselves and the other clubs. 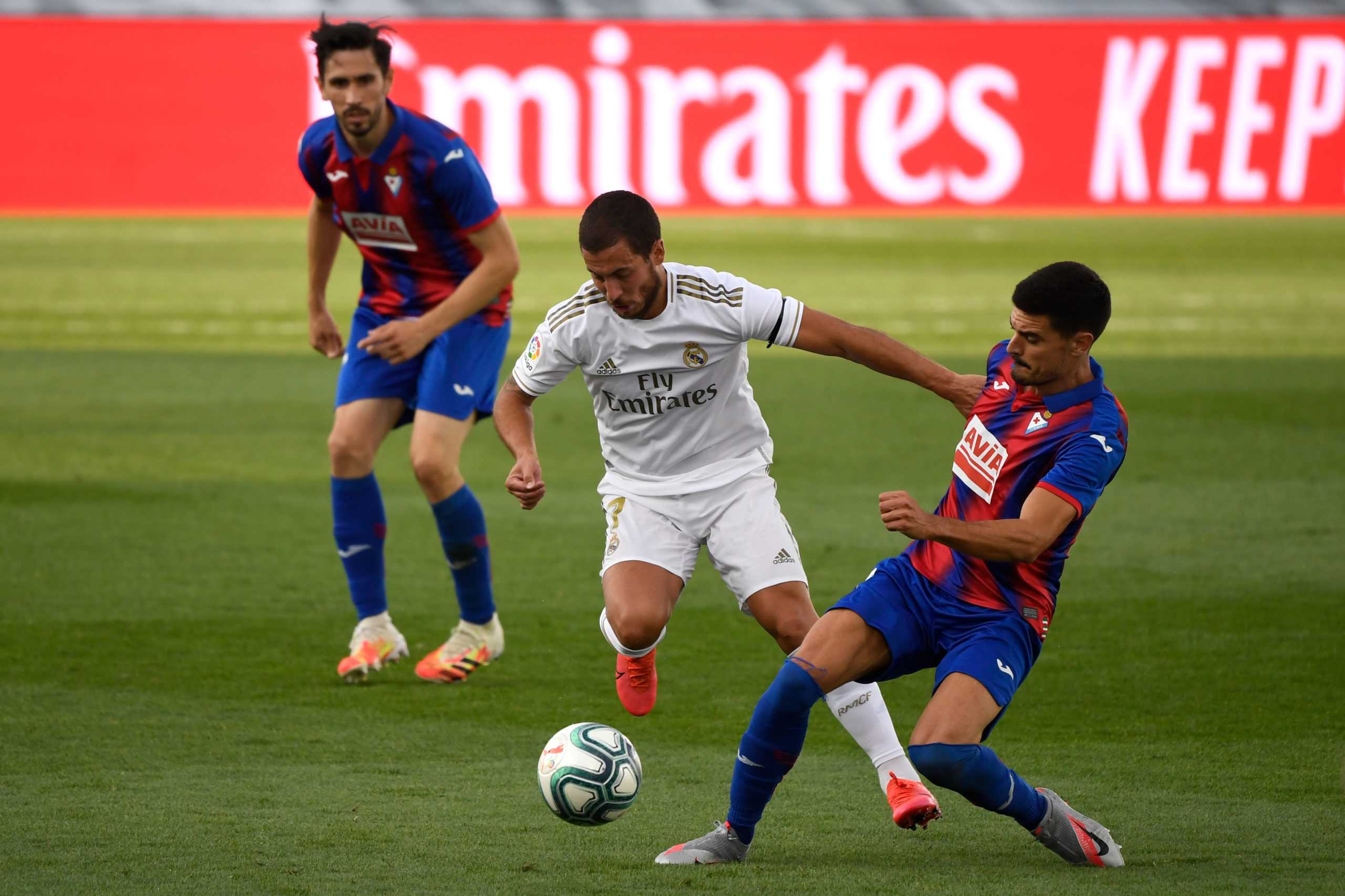 It only took Real 182 seconds to get in front, as Kroos found the top corner from the edge of the box.

At the half-hour mark, Ramos won the ball back and started a counter-attack. Benzema found Hazard in front of goal, but the Belgian unselfishly squared it for Ramos, who smashed it into an empty net.

Only 6 minutes later, Hazard drew a good save out of Dmitrović, but the ball only fell to Marcelo after it was half-cleared, and the Brazilian thumped it home.

Eibar were better in the second half, and almost scored in the 57th minute when Sergi Enrich’s header struck the crossbar.

It took only two more minutes for them to open the scoring when De Blasis’ shot took a couple of deflections – crucially off Bigas, and went through Courtois’ legs.

So, the match ended 3-1 in favour of the hosts.

Eibar pressed high and with good intensity, but this also cost them – for example before the second goal, when a counter-attack broke their defence down.

Real looked to draw Eibar in, and then hit them on the counter, as was evident in the second and third goals.

Thibaut Courtois – Not needed in the first half, but he made a few important saves in the second. Arguably could have done better to prevent the goal. 6.5

Dani Carvajal – Decent at the back, but failed to do anything in attack. 6

Raphaël Varane – Alright in defence, but he didn’t do too much in the second half. 5.75

Sergio Ramos – Looked ever so slightly shaky at the back, but his distribution was good. Also got a great goal after starting a counter-attacking move. 6.75

Marcelo Vieira – Solid at the back, and got a great goal. His crosses were good too. Ran out of juice towards the end. 6.75

Luka Modrić – Good in attack, as he pulled the strings from deep. However, he was missing in midfield. 6.25

Casemiro – Looked solid in defensive midfield early on, but was overrun in the second half. Rather lucky to not get sent off. 6

Toni Kroos – Scored a cracker early on, and looked good thereafter, as he drove his side forward in attack. 6.5

Rodrygo – Looked decent down the right side, but failed to have a pronounced impact. 5.5

Eden Hazard – Had a decent match, as he got an assist when he unselfishly squared the ball for Ramos for the second goal. His dribbling and passing was good too. 6.5

Karim Benzema – Showed great link up play up front, as his passing was inch-perfect. Had a hand in each of his side’s goals. Kept quiet in the second half, though. 7

Ferland Mendy – Decent in the unusual position of right-back, but had no impact up front. 6

Gareth Bale – Is there a golf course near the Alfredo Di Stéfano? He must have been there, because he wasn’t seen on the football pitch. 3.5

Vinícius Júnior – Failed to have an impact up front. 3.75

Team – Real looked very good in the first half, as they took all 3 of their major chances, and kept Eibar relatively quiet. However, the second half was terrible, as they had no control on the match. They created nothing in front of goal, and had to rely on Courtois for a few big saves. The scoreline is slightly flattering towards them. 6

Marko Dmitrović – Didn’t have too much to do, but he made a few good saves. Couldn’t have stopped the goals. 5.75

Rober Correa – Decent down the right, but he failed to do anything up front or to contain Hazard. 5.5

Paulo Oliveira – Made numerous important interventions in the match, as he was good at the back. 6.5

Anaitz Arbilla – Alright at the back, but failed to do too much. 5.75

Rafa Soares – Looked decent down the left, as he kept Rodrygo rather quiet. 6

Sebastián Cristóforo – Did well in midfield, and his link-up play was good. Had a few good chances too. 6.5

Sergio Álvarez – Played well in holding midfield, as he kept Madrid from breaking too often. 6.25

Fabián Orellana – Saw a good amount of the ball, and threatened the Madrid defence with his silky feet. 6

Edu Expósito – Good in attacking midfield, and his passing was impeccable. 6.75

Pablo de Blasis – Looked decent down the right side going forward, as he troubled the Madrid defenders with his determined dribbling. Caused the goal with his deflected shot too. 6.5

Kike – Pressed with extreme intensity in the first half, but was alone most of the time. 6

Pedro León – Had a couple of big chances, but his finishing was not great. Did very well in midfield, though. 6.5

Sergi Enrich – Almost scored with the first touch of his match, and was threatening up front. 6.25

Pedro Bigas – Got a rather lucky goal, but he won’t be complaining. Failed to do too much thereafter. 6.5

Team – Eibar were overrun by Real in the first half, but they showed great character to fight back in the second. They even won the second period by a goal, but it was their failure to take all of their chances which cost them. Promising display from them, though. 6.25

Guillermo Cuadra Fernández will be satisfied with his performance, but he didn’t have any difficult decisions to make. 7

Real Madrid close the gap to Barcelona back down to 2 points. Los Blancos have 10 matches to try to overtake them, and if the first 28 are anything to go by, it will certainly be exciting.

Eibar stay 16th, and are 2 points and places away from the drop zone.