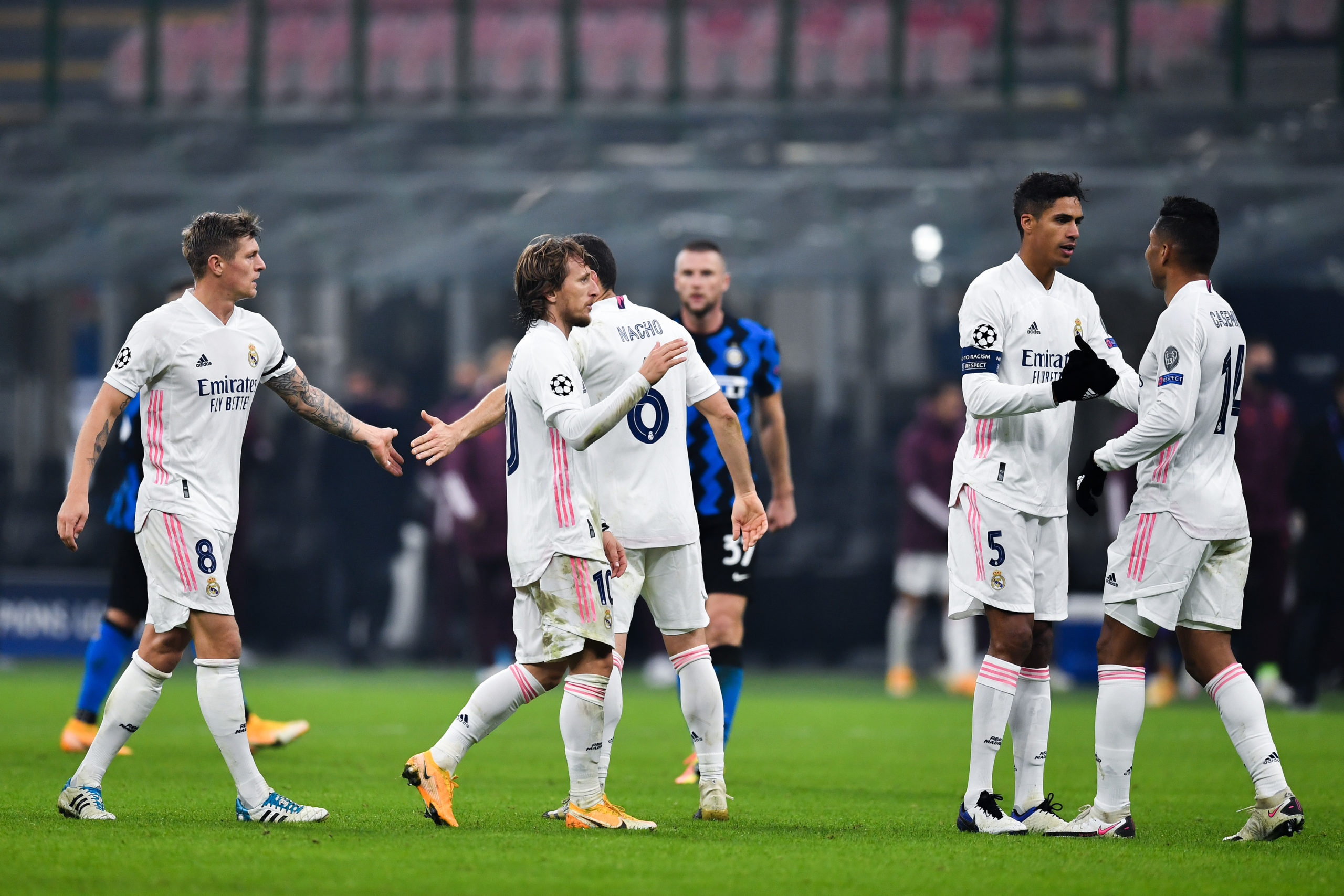 Real Madrid have put themselves in a good position to qualify for the Champions League round of 16 following their 2-0 win at Inter Milan on Wednesday night.

Los Blancos started the game with just four points after three matches in Group B and were trailing Shakhtar Donetsk for the second spot on the head-to-head record.

While Shakhtar suffered a disappointing 4-0 defeat at Borussia Monchengladbach, Los Blancos registered a comfortable victory at San Siro against Inter, who played with 10 men for an hour after Arturo Vidal’s needless red card.

Eden Hazard scored early from the penalty spot for the visitors and the lead was doubled before the hour mark after Achraf Hakimi’s own goal. The former Madrid graduate deflected Rodrygo’s shot into the back of Samir Handanovic’s net.

The victory has taken Zinedine Zidane’s side to seven points on the table, three ahead of Shakhtar and five in front of Inter. They are just one point adrift of leaders Borussia Monchengladbach with two games left in the group stage.

Thibaut Courtois: The Belgian had a quiet game with the Nerazzurri barely testing him. He made one key save to deny Ivan Perisic late on and will be glad to keep a clean sheet after eight unsuccessful attempts – 7/10

Dani Carvajal: The right-back made a number of overlapping runs and he combined impressively with Lucas Vazquez on the wing. Zidane will be relieved with his return after a long injury lay-off – 7.5/10

Raphael Varane: Captained the team on the night in the injury absence of Sergio Ramos. Led from the front with two aerial duels and three tackles, including a fortuitous one on Vidal, who was shortly sent off for repeated penalty protests – 8/10

Nacho: The Spaniard was probably the weak link in Los Blancos’ defence, but came up with a bright performance with five tackles. He also floated in the attack without being caught out of position and earned the early penalty – 8.5/10

Ferland Mendy: Similar to Carvajal, the Frenchman made several overlapping runs from the left side of the defence. He played a number of one-twos and should have shot on goal after being put through at the midway stage of the first half – 7.5/10

Toni Kroos: The German played as the defensive midfielder with Casemiro starting on the bench. He produced an absolute masterclass with 98 percent passing success and provided the key pass in the lead-up to the second goal on the night – 8.5/10

Luka Modric: Kroos’ midfield partner has shown no signs of slowing down despite turning 35. Modric produced three key passes and comfortably outclassed the likes of Nicolo Barella and Roberto Gagliardini, who could not cope with his quick movement and distribution – 8/10

Martin Odegaard: Odegaard has started finding his feet with Los Blancos after his time on the sidelines with a calf problem. He played as the advanced midfielder and found himself in pockets of space time and time again. He provided the ball leading to Nacho’s penalty – 8/10

Lucas Vazquez: Definitely had his best performance of the campaign. Starting on the right wing, Vazquez was a constant menace for the Nerazzurri defence with four shots on target while one of them hit the woodwork. He was also responsible for the cross leading to the second goal – 8.5/10

Eden Hazard: The Belgian scored only his third goal of his Real Madrid career from the penalty spot. Besides his spot-kick, Hazard linked up impressively with Odegaard and Vazquez in the attack and managed six take-ons. He is slowly finding form after the hamstring injury setback – 8/10

Mariano: The ex-Lyon star was handed his first Champions League appearance since the 2018/19 season after Karim Benzema was out injured. He was impressive early on and had one good chance which he squandered with a cushioned header to Handanovic – 7/10

Casemiro: Replaced Odegaard prior to the hour mark. He instantly took up the holding midfield role which allowed Kroos to advance forward to make the difference by creating the second goal – 7/10

Rodrygo: The Brazilian made an instant impact after coming on for Mariano. Within a minute, he got on the right end of Vazquez’s cross and his shot was deflected into the back of the net by Hakimi – 7.5/10

Vinicius Jr: He was Zidane’s final substitution on the night and came on for the last 10 minutes in place of Hazard. Barring one attempt on goal, he did not have much time to make a difference – 6.5/10