Barcelona hosted Bilbao, with a chance to go back to the top of the table with a win. 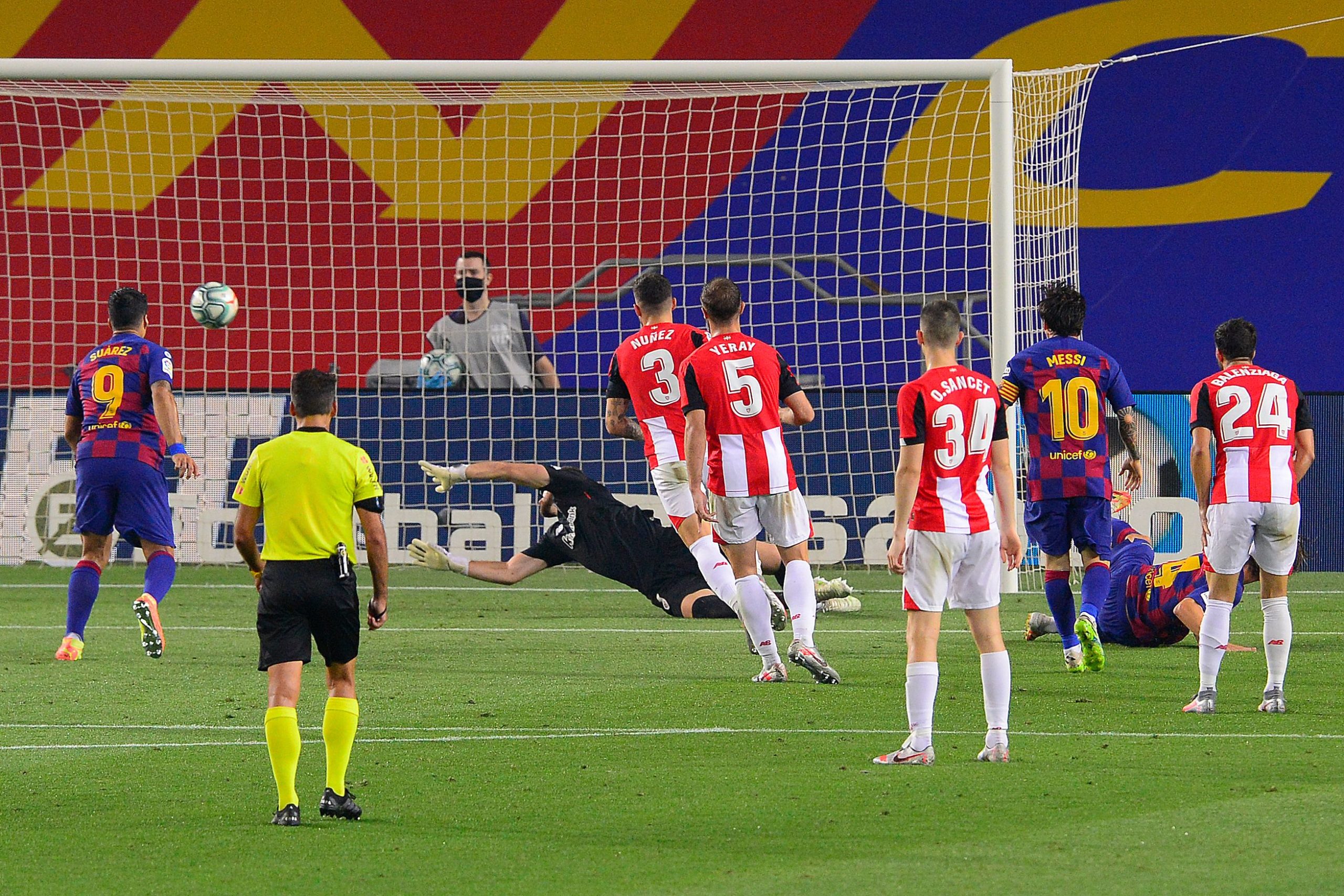 Athletic Club almost went in front in the 3rd minute, when a cross was missed by everyone, and heading towards goal. But ter Stegen went down to his left, and made the save.

They had another big chance in the 21st minute, when Álvarez had a free header from 6 yards out after a free-kick found him, but he put it wide.

Fati had a big chance in the 65th minute as he had a free header after Suárez’s cross found him, but the youngster put it high.

Barcelona finally scored in the 71st minute, when Messi combined with Rakitić to play the Croatian through on goal, and he found the net.

Messi tried a couple of shots from the edge of the box thereafter, but he missed the target.

Barcelona had one last chance to double their lead in the 94th minute, but Fati only managed to hit the post, and so it ended 1-0 to the Blaugarana.

Barcelona tried to keep hold of possession, and build slowly from the back. They also pressed Bilbao high up the pitch.

Bilbao crowded out the edge of their box in a bid to deprive Barcelona of good chances. Then, after winning possession, they tried to send it far up the pitch as soon as possible, asking their attackers to chase. They didn’t shy away from some slight pressing if Barcelona didn’t deal with the second ball.

Marc-André ter Stegen – He had very little to do except the early save, but he’ll be glad with the clean sheet. 5.75

Nélson Semedo – Didn’t do too much at either end of the right wing. 5

Gerard Piqué – Defended well, and did well to keep Williams in check. 6

Clément Lenglet – Good at the back, and his distribution was great too. 6.25

Arthur Melo – Saw a decent amount of the ball, but failed to make things happen. 4.5

Arturo Vidal – Industrious in midfield as always, as he tried to make things happen up front. 6.25

Lionel Messi – La Pulga worked his socks off in attack as he desperately tried to make things happen. Created a good amount of chances, and ended up with an assist. 7.25

Luis Suárez – Had a couple of decent chances, but failed to make them count. Why is he being forced to start in consecutive games after such a long injury lay-off, though? 5

Antoine Griezmann – Minimal impact up front, as he failed to create any major openings. 4.25

Riqui Puig – Injected a lot of life into an otherwise-dead midfield, as he worked his socks off, making lots of recoveries and picking out good passes. 7.5

Ivan Rakitić – Helped in midfield, and he got the all-important goal. 6.5

Ansu Fati – Looked lively in attack, and he should have done better when he hit the post. 6.25

Team – Barcelona looked very bland in the first half yet again. They even conceded a couple of chances, and didn’t worry Simón. But, after Puig was sent on, their midfield started to feel a lot more alive. They finally got a goal in the 71st minute, and managed to hold on. Not very convincing, but it’s the result that matters. 6

Unai Simón – Made a few good stops, but failed to prevent the goal. 6.75

Óscar de Marcos – Did very well against Griezmann defensively, but not so much against Fati. 6.25

Unai Núñez – Defended very well, as he made a good amount of challenges. 6.75

Yeray Álvarez – Brilliant at the back, as he made 15 recoveries, but he missed his big chance in front of goal. 7.5

Mikel Balenziaga – Didn’t manage to hold out against Messi. 4

Unai López – Alright in midfield, and created one or two chances with his set-pieces. 5.5

Mikel Vesga – Won the ball very often in midfield, but failed to stop Puig and Rakitić. 6.25

Iñigo Lekue – Worked hard in midfield, but had little impact at either end. 5

Oihan Sancet – The youngster battled hard in midfield, but he was defeated when Barcelona sent Puig on. 6

Iñigo Córdoba – Worked hard down the left to contain Semedo, but had no attacking impact. 5.5

Iñaki Williams – Laboured up front as he was all alone, but had nothing to speak of except one half-chance. 5.25

Dani García – Decent in midfield, but he failed to create anything. 5.75

Iker Muniain – Didn’t do much bar the one chance he created. 4.5

Team – Bilbao were set up well, and were particularly good in the beginning. They had two big chances, but they failed to take them. They held on under immense pressure, as they were well organised. Slowly, they started to fade away, and then Barcelona managed to score a goal. They tried their best, but didn’t trouble ter Stegen, and didn’t get the points. 5.5

Jesús Gil Manzano didn’t get much wrong, but he should have given Messi a card in the 70th minute when he steeped on a defender. Decent showing overall. 6.25

Barcelona go back up to the top with a 3-point cushion, but only until Real Madrid play.

Bilbao stay in 10th spot, and have a 4-point gap in the top-half of the table.