The La Liga was back and with a bang, as Sevilla hosted Real Betis for the Seville derby in the Ramón Sánchez Pizjuán Stadium. 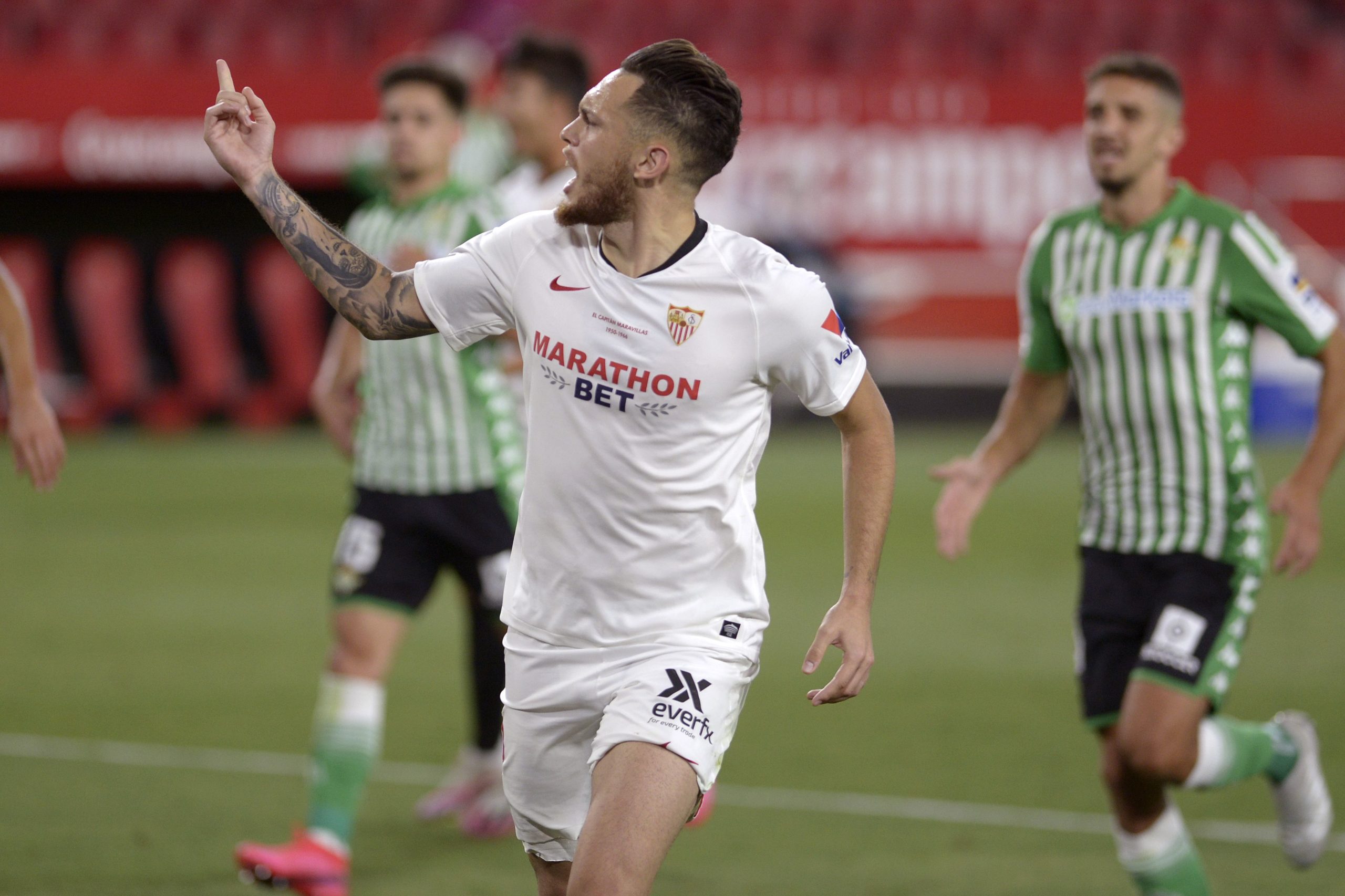 Sevilla were the better side early on, and almost went in front, when Ocampos smashed the woodwork from a tight angle.

Sevilla had a couple of headed chances thereafter too, but they failed to make them count. So, it was scoreless at the break.

Sevilla had more chances in the second half, and they finally went in front in the 56th minute. Bartra climbed over De Jong and gave him a shove in the box, and the referee gave Sevilla a penalty. Ocampos was emphatic from the spot, as he slotted it home.

6 minutes later, a training ground routine from a corner saw Ocampos flick it on for Fernando, who was able to head it home from 3 yards away.

Betis pushed a lot thereafter, but they failed to trouble Vaclík, and so it ended 2-0 to the home side.

Betis, on the other hand, looked to soak the pressure. Whenever they had the ball, they tried to keep it and slow the game down. Because of that, they failed to create too many chances.

Sevilla switched things up in the second half, as they looked to draw Betis in and hit them on the counter.

Munir vs Emerson – Munir looked very threatening down Sevilla’s left flank, but Emerson did well to prevent him from wreaking havoc on his side’s defence. However, Emerson’s attacking threat was totally nullified by Munir, with help from Ocampos at times.

Tomáš Vaclík – Had absolutely nothing to do except take one or two goal-kicks. 6.5.

Jesús Navas – Great display from the captain. He kept Tello completely quiet, and went forward pretty often too. His crosses were great as always. 7.5.

Diego Carlos – Was solid in defence, as he let nothing past him. Made a couple of crucial challenges to keep Fekir quiet in front of goal. 7.

Jules Koundé – Was a rock at the back. He broke down almost every Betis attack, as he let nobody past him. Was an aerial threat from set-pieces too. 7.5.

Sergio Reguilón – He was very lively down the left side, as he contained Fekir, and went forward pretty often too. 7.25.

Joan Jordán – Not bad in midfield, but he failed to make too much happen. 6.

Fernando – Strong in defensive midfield, His distribution was great, and he made a lot of recoveries too. Got a goal as well. 7.25

Óliver Torres – Worked very hard in midfield, as he was all over the pitch. His passing was great as well. However, his influence waned late on. 7.

Munir El Haddadi – Made a nuisance of himself down the left, but couldn’t really threaten the goal. Worked very hard defensively too. 7.25.

Luuk de Jong – Worked hard up front, and held on to the ball well. Was an aerial threat too, but he missed his chances. However, he did well to win the penalty. 6.75.

Lucas Ocampos – He was absolutely everywhere on the pitch – from left back to right winger. Got a deserved goal and an assist after an industrious performance. 8.25.

Éver Banega – Decent in midfield after he came on. 6.5.

Youssef En-Nesyri – Was pretty isolated up front after he came on, and therefore he failed to make an impact. 5.5.

Suso – Helped his side in defence, but couldn’t do much going forward. 6.5.

Team – Sevilla were the better team for most of the match, and thoroughly deserved the win. Los Palanganas looked to be fitter and they worked far harder than their city rivals. They created a decent amount of chances, took a couple of them, and denied Betis in front of goal. 7.75.

Joel Robles – Made a couple of important saves, and you can’t blame him for the goals. 6.

Emerson – Did well to keep Munir in check. Popped up in attack occasionally, and caused a few problems with his crosses. 7.

Marc Bartra – Gave away a needless penalty, and his distribution was not great either. 4.25.

Sidnei – Strong at the back, as he thwarted a lot of crosses, and prevented De Jong from causing any damage. 7.

Álex Moreno – Decent going forward, but he failed to keep Ocampos in check. 5.75.

Sergio Canales – Had no impact on the match, as he rarely saw the ball. 4.75.

Guido Rodríguez – Great in holding midfield. He saw a lot of the ball, and was under constant pressure, but never seemed to crack. 7.

Carles Aleñá – Failed to make anything happen in midfield, and was overrun by his Sevillian opponents. 5.25.

Nabil Fekir – Betis’ sole attacking threat. He won a number of fouls thanks to his dancing feet. However, he was generally swarmed by three Sevilla defenders, and therefore failed to show up in front of goal. 6.75.

Borja Iglesias – Did absolutely nothing up front – in part due to a lack of service, and also due to a poor work rate. 3.

Cristian Tello – Saw a bit of the ball, but failed to create anything at all. 4.75.

Diego Lainez – Looked threatening after he came on, but failed to create a great chance. 6.5.

Loren Moron – Couldn’t do too much in front of goal, and didn’t see a lot of the ball either. 6.

Joaquín – A major impact substitution. He lifted his side after coming on, and looked extremely threatening. His passing was outrageous, as he worked very well with Fekir. Should have started. 7.75.

Team – Betis did not look good for the first period. They were totally overrun by Sevilla for almost an hour. They conceded the goals due to their dismal defending from corners. They only looked good after Joaquín came on when they were 2-0 down. He, and Fekir were their greatest attacking threats, and if they had started together, things could have been different. The rest of the side were not good though, and Los Verdiblancos have a lot to work on. 5.75.

Mateu Lahoz had an easy first half, but a few controversies to deal with in the second, most notably the penalty. He got his calls right, though. 7.25.

Sevilla move up to 50 points in the La Liga table, as they stay in 3rd spot. They are 8 points away from the leaders Barcelona for now.