Real Madrid hosted Villarreal at the Alfredo Di Stéfano, knowing that a win would be enough to clinch the La Liga title. 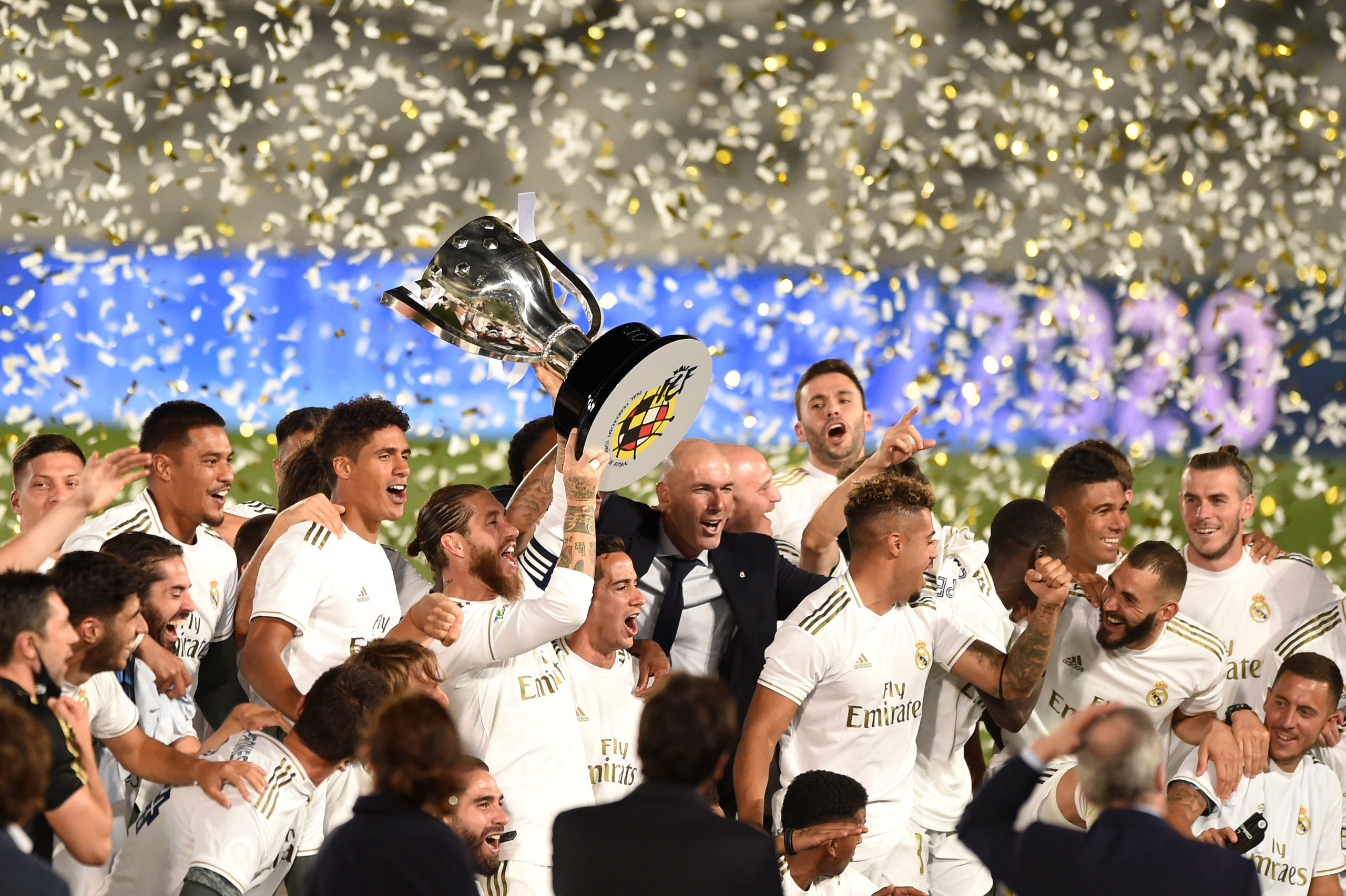 After dominating proceedings from the start, Real went in front in the 29th minute. A misplaced pass from Chakla was intercepted by Casemiro, and Modrić snapped up on the loose ball. The Croatian then found Benzema to his right, who put the finish through the keeper’s legs.

Eventually, in the 73rd minute, Real won a penalty when Chakla brought Ramos down in the box. The captain stepped up, and passed to Benzema who smashed it in. But, both Benzema and the Villarreal players went too early, and it was retaken. The Frenchman took matters into his own hands from the spot, and slotted it in.

They almost got a third in the 81st minute when Kroos had a hit from range, but he only struck the crossbar.

Only two minutes later, Iborra pulled one back with a brilliant header into the top corner after Gaspar found him with a cross.

In the 93rd minute, Courtois pushed a cross away, saved the resultant effort and another follow-up from Iborra, as he kept his side ahead.

Real thought that they had a third when Vinícius found Asensio with a cut-back after dancing his way into the box. Although the Spaniard scored, it was ruled out for handball in the buildup.

So, it ended 2-1 to Los Blancos, who are Champions of Spain.

Real kept a lot of the ball, and they tried to use it by slowing building out from the back. They pressed Villarreal in midfield, and won a lot of possession there.

Villarreal focused on staying compact at the back, and tried to pass their way through after winning the ball back.

Thibaut Courtois – Was largely a spectator for most of the match, but made a few good saves late on. 7

Raphaël Varane – His distribution was sub-par, but he defended well. 6.25

Sergio Ramos – Good in defence, and won a crucial penalty too. He tried something ingenious from the spot, but unfortunately it had to be retaken. 7

Ferland Mendy – Didn’t do too much down the left, but he wasn’t bad. 6

Luka Modrić – Ran the show in midfield once again, as he strung a lot of passes together, and made a good number of recoveries. Got an assist for the opener too. 8.25

Casemiro – Good in defensive midfield, as he did well to screen his defence. 6.5

Toni Kroos – Great in the middle of the park once again, as he created some good chances, and came as close to scoring as the post. 7

Rodrygo – Made some good runs down the right, but his end-product was not great. 5.5

Karim Benzema – Yet another brilliant brace for the free-scoring Frenchman. He linked play up well, and took his chances clinically. 8

Eden Hazard – Threatened on the left side, and drew quite a few fouls. 5.75

Vinícius Júnior – Failed to do much after coming on. 4.25

Marco Asensio – Worked hard up ahead, but couldn’t do much. 4.5

Sergio Asenjo – Made a few good saves, and can’t be blamed for the goals. 6.25

Mario Gaspar Pérez – Decent in defence, and got a good assist up front. 6.75

Sofian Chakla – Not a great day for the Moroccan, as he made an error leading to a goal, and gave away a penalty. 3

Pau Torres – His distribution wasn’t great, but he defended decently. 6

Jordi Quintillà – Failed to have a proper impact on the left side. 5.5

Manu Morlanes – Was overrun in midfield, and he couldn’t get into the match. 4

André-Frank Zambo Anguissa – Was alright in the middle, but couldn’t do much at either end. 5.75

Rubén Peña – Failed to have a proper impact on the right. 4

Samuel Chukwueze – Got into promising positions at times, but he didn’t create anything substantial from them. 4.25

Moi Gómez – Failed to create anything on the left flank. 4

Gerard Moreno – Worked very hard up front, but couldn’t get anything in front of goal. 6

Bruno Soriano – Tried his best to make things happen, and managed to create a chance or two. 5.75

Javier Ontiveros – Lively at both ends of the pitch, and had a few good efforts on goal. 6.25

Santi Cazorla – Was nowhere in the match after coming on. 4.25

Vicente Iborra – Got a good goal after coming on, but missed a great chance late on. 6

Team – Villarreal were contained from the start, and although they kept things clean at the back, two individual mistakes allowed Real Madrid to take an advantage. They scored late on, but then missed a glorious chance in stoppage time, and had to settle for a loss. A decent effort from them, but it wasn’t good enough on the night. 5.25

Alejandro Hernández Hernández got his calls right, and he’ll be happy on the day. 6.5

The win, coupled with Barcelona’s loss, takes Real Madrid 7 points clear at the top, and with only a game to play, this means that they have secured the La Liga Title.

Villarreal are in 5th, and have a 2-point lead over Real Sociedad who are just below them.