High-flying Granada hosted Real Madrid, who were only 5 points away from the title. 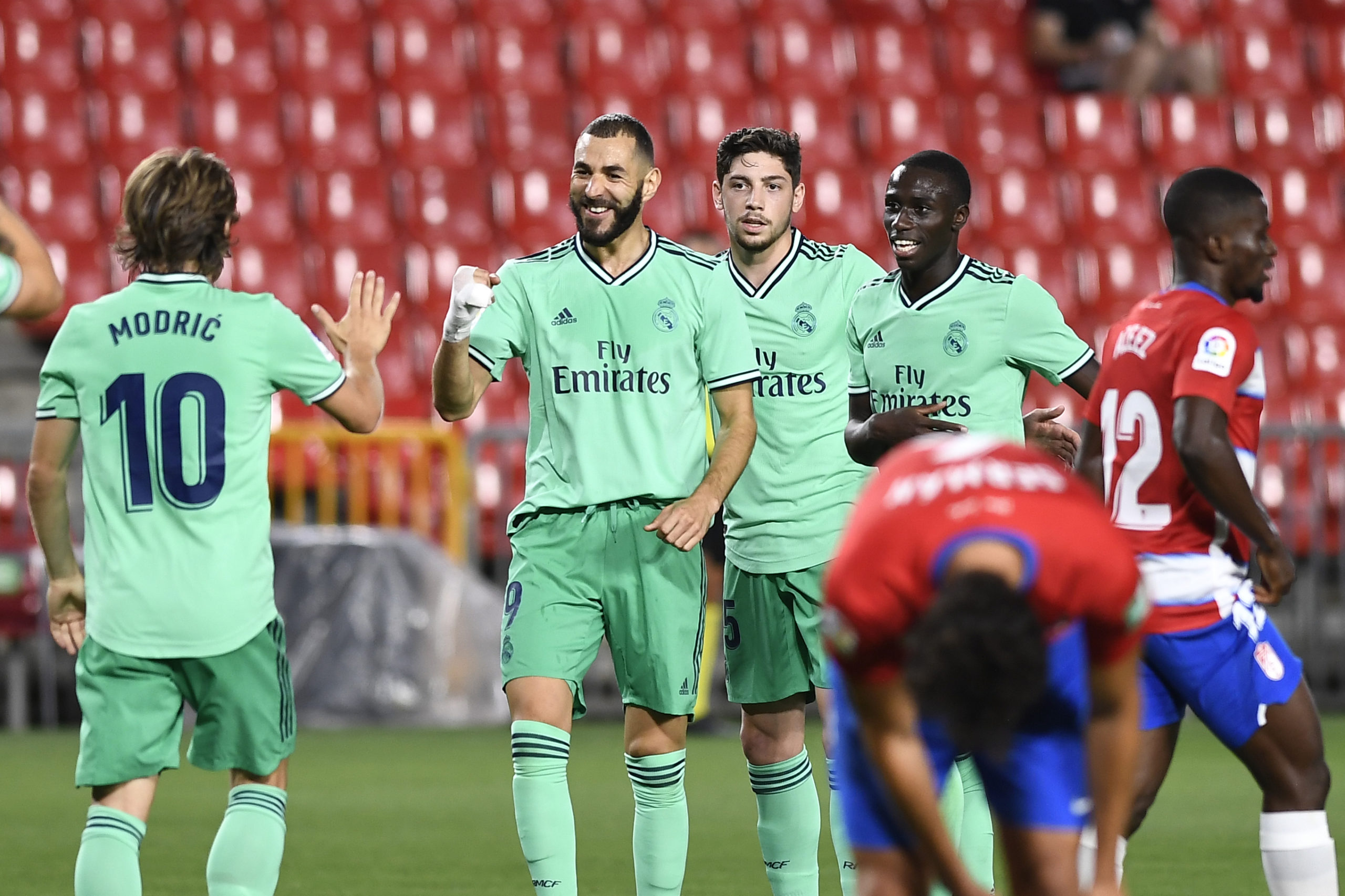 It was a balanced match at the start, but Real broke through in the 10th minute. Mendy received the ball on the left, and then darted past a couple of defenders before smashing into the near top-corner from a tight angle.

6 minutes later, Benzema made it two. Isco found Modrić with a backheel, and the Croatian found Benzema with a through ball. The Frenchman cut away from Víctor Díaz, and fired past the keeper.

Granada started to push for a goal thereafter, and came close in the 36th minute when Duarte’s header was parried away by Courtois.

Real came close to a third in the 43rd minute after Modrić and Benzema linked up, allowing the Frenchman to shoot. His shot was going in, but Silva was able to parry it away.

5 minutes after half-time, a defensive lapse from Casemiro allowed Herrera to slip a through ball to Machis, who put it through the keeper’s legs.

Granada had two big chances in the 85th minute. The first shot from Antoñín was parried away by Courtois, and then a low cross found Azeez, whose shot was cleared off the line by Ramos.

Despite trying their best, Granada couldn’t get a second, and Real held on to a potentially decisive 1-2 victory.

After their defence failed early on, Granada were forced to take the game to Madrid. They were outnumbered in midfield, so they tried to go down the flanks, and then put crosses into the box. After half-time, they ditched their five-man backline, and fielded a 4-3-3.

Real were not playing their usual 4-3-3, and instead opted for a 4-3-2-1, with Modrić and Isco tucking inside and allowing the full-backs to push up. On the right, Modrić exchanged positions with Isco at times. With his substitutions, though, Zidane reverted to a 4-3-3.

Rui Silva – Didn’t have too many major saves to make, but he did well to handle a few shots. 6.5

Dimitri Foulquier – Failed to have a real impact at either end. 4

Víctor Díaz – Was responsible in-part for both goals conceded. Either time, he was too socially distanced from his man, allowing them to shoot and score. He was tried out at the left, but couldn’t do too much there either. 3

Germán Sánchez Barahona – Good at the back, as he made quite a few challenges to try to keep things clean. 6.5

Domingos Duarte – Strong in defence too, as he tried to cover the space behind the wing-backs on either flank. 6.5

Fede Vico – Rather quiet on the right flank in the first half, but he did very well after half-time as he found spaces in the attacking third. 6

Gil Dias – Looked good on the left, as he defended well and created a couple of chances too. Had an outing on the right too, and he was decent there. 6.75

Ramon Azeez – Didn’t have an effect on the match, as he was contained in midfield. Did very well after he was switched to right-back, though. 5.5

Yangel Herrera – Battled hard in midfield, and got a very good assist for the goal. 6.75

Darwin Machís – Rather quiet down the left in the first half, but he got a very good goal early on in the second. 6.75

Carlos Fernandez Luna – Did very well up front, as he pressed Madrid’s defence. Won the ball back from Casemiro in the buildup to his side’s goal. 7

Antonio Puertas – Created a couple of good chances after coming on, as he did well down the right. 6.5

Ángel Montoro Sánchez – Looked good at both ends after he was sent on. 6.75

Team – Granada were dominated at the start, as they conceded two and did very little to trouble Courtois. Even then, they did well to dig in and hold on. Diego Martínez did brilliantly at half-time to change his system, and his side came flying out of the blocks. They scored in the 50th minute, and kept Real away from their goal. They piled on the pressure late on, but just couldn’t get a second. It was a very good performance, though. 6.5

Thibaut Courtois – Made a couple of crucial saves to keep his side in front. 6.5

Dani Carvajal – Decent down the right, but he didn’t have too much to do. 6

Raphaël Varane – Alright in defence, as he helped Ramos out at the back. 6.25

Sergio Ramos – Did very well at the back as he kept his side ahead through some crucial interventions. 7

Ferland Mendy – Very good down the left, as he patrolled the flank at both ends. Scored a very good goal too. 7.5

Federico Valverde – Got into promising positions at times, but couldn’t do too much. 5.5

Casemiro – Although he did make a few important tackles, he lost the ball sometimes, for example just before the Granada goal. 5.5

Toni Kroos – Created some good chances for his side, as he tried to link up his side’s play from a deeper role. 6.75

Luka Modrić – The Croatian looked brilliant, especially in the first half, as he was very graceful on the ball, picked out some great passes and assisted his side’s second. 8

Isco – Was quite lively in attacking midfield, as he found pockets of spaces to operate in. 6.5

Karim Benzema – Looked good in the first half as he created a couple of chances and scored a goal, but was rather subdued thereafter. 6.5

Marco Asensio – Didn’t have a great impact off the bench. 4.5

Rodrygo – Created one or two decent chances, but saw very little of the ball overall. 5.25

Team – Unlike most of their matches after the restart, Madrid looked great at the start. They blew Granada away and scored two great goals, dominating proceedings for most of the first period. They couldn’t deal with Granada’s tactical changes, and conceded early on in the second. Their attacking changes didn’t have an impact, but they managed to hold on to a one goal lead, and stumbled over the finish. Not a great performance, but a perfect result for Los Blancos. 6.5

Santiago Jaime Latre had a relatively straightforward match, and he did his job well. 7

Granada drop to 10th after this loss, but are only 4 points away from 6th place. If things go there way, they may have an outside chance of European qualification.

Real extend their lead at the top to 4 points, and with just two games remaining, they only need a couple of points to seal the La Liga title.