Barcelona hosted Espanyol for the Derbi Barceloní. The hosts couldn’t afford to drop points because that would take the pressure off Real Madrid, but neither could the visitors. 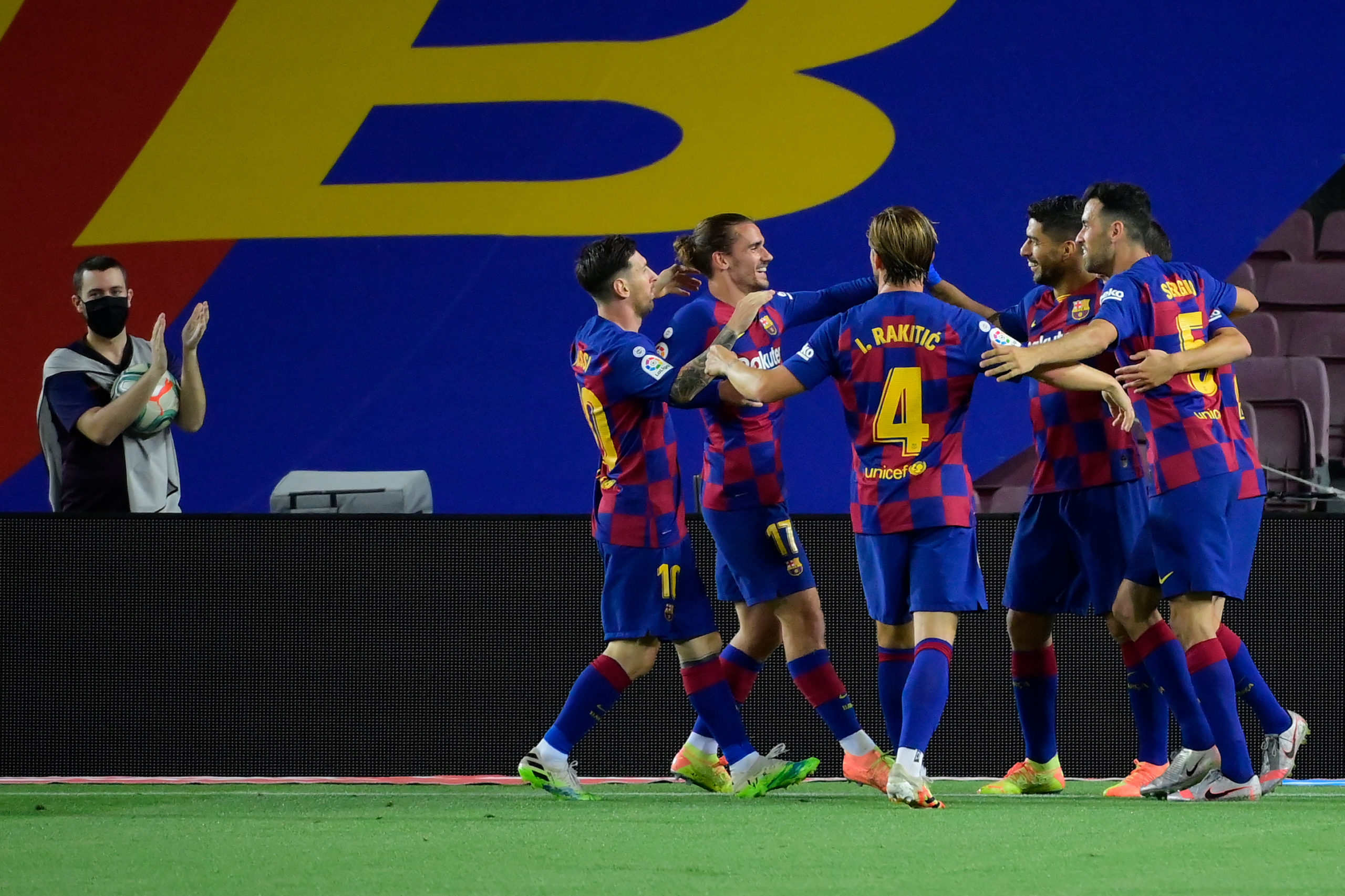 Barcelona were on the front foot early on, but it was Espanyol who had the first clear chance in the 10th minute. A simple ball over the top saw Embarba burst through on goal down the right flank, and ter Stegen had to smartly keep his shot out.

Barcelona had a great chance in the 25th minute when Griezmann sent Suárez through, but the Uruguayan took too much time, and had his shot blocked by Calero.

Espanyol had a massive chance just before half time. Vilà was set free by de Tomás, and his cross was met by Lenglet, who forced a save out of ter Stegen. The loose ball was helped on to Vilà, who could only find the outside of the post.

At half time, Barcelona sent Ansu Fati on, but it seems that the youngster didn’t want to be on the pitch for too long, because only 3 minutes in, he put a tackle in with his studs going into Calero’s calf (to be fair to him, he did win the ball). The referee initially gave him a yellow card, but VAR was in the opinion that it was a red, and the teenager was given his marching orders.

Espanyol didn’t want to be outdone, though. Lozano attacked Piqué’s calf with a similar tackle but at a lower height. Once again, the referee gave a yellow card, and then VAR said that it was worth a red, and so both teams went down to 10 men.

Barcelona finally broke through in the 56th minute. Griezmann found Messi with a lovely backheel, but the Argentine had his shot blocked. However, the ball only fell to Suárez, who found the net.

There was yet more controversy in the 66th minute when Lenglet clipped López’s forehead, but no card was given.

2 minutes later, Messi smashed a volley from the left, but the keeper made a great save to keep it out.

It was a cagey affair thereafter, but it ended 1-0 to the Blaugarana.

Barcelona dominated possession, but didn’t do too much with it, as a lot of their passing was aimless.

Espanyol opted to go with a back five in order to counter Barcelona’s 4-3-1-2. They sat deep, and tried to hit Barcelona on the break.

Marc-André ter Stegen – Made a few smart saves to spare his defence the blushes. 7

Nélson Semedo – Did absolutely nothing in attack, and got caught out at the back too. 4

Gerard Piqué – Very good at the back, as he made a lot (7) of clearances to keep Espanyol away from goal. 7.25

Clément Lenglet – Decent in defence, but he got caught out of positiion at times. 6.25

Jordi Alba – Didn’t have a real impact at either end. 4.5

Ivan Rakitić – Alright in midfield, but he couldn’t do too much to affect the match at either end. 5.5

Sergio Busquets – Saw a lot of the ball in midfield, but his passing was very aimless most of the time. 5.75

Sergi Roberto – Looked decent in the middle of the park, and filled in well at right-back. 6.75

Lionel Messi – Looked good up front, as he created a lot of chances. 7.5

Antoine Griezmann – Decent up front, as he created a few chances, and did very well in the buildup to the goal. 6.5

Luis Suárez – Although he had very little to do, he did well to score. 6

Ansu Fati – Not a great day for the youngster because he got sent off within 3 minutes off coming on. 2.5

Arturo Vidal – Didn’t have a proper impact after coming on. 4.5

Team – After looking brilliant against Villarreal, Barcelona were back to their boring old selves on this occasion. They fashioned only two clear-cut chances, and had to rely on ter Stegen to bail them out. Their passing was very aimless, and they barely managed to scrap past despite enjoying nearly three-quarters of possession. They need a major rethink, and fast. 6.25

Pau López – Made a number of brilliant saves to keep his side in the match. 7.5

Víctor Gómez Perea – Did well to hold out on the right side. 6.25

Fernando Calero – Defended very well, as he made a lot of crucial blocks. 6.5

Bernardo Espinosa – Great at the back, as he made a lot (7 again) of clearances to keep Barcelona at bay. 7

Dídac Vilà – Great down the left, as he defended well and got forward too. He even hit the post, but couldn’t affect the final score. 7.5

Pol Lozano – Put in a great shift in midfield, but then picked up a needless red card when his team were down to 10 men. 3.5

David López – Worked hard in the middle, and helped his defence too. 6.25

Marc Roca – Good in midfield, and he created a couple of good chances too. 6.5

Adri Embarba – Worked very hard up ahead, and carved out of good chances too. 6.75

Raúl de Tomás – Really smart display from him, as he did well to make good use of whatever little he had. 7.25

Víctor Campuzano – Failed to have a proper impact off the bench. 4.75

Team – Espanyol set out with a proper plan, and they nearly opened the scoring in the first half. They came as close as the post, and were denied by ter Stegen at times. They defended well too, and allowed very few openings. It was a moment of quality which sealed their relegation, but they showed great fight. The question: Where was that fight against their direct relegation rivals? 6.5

José Luis Munuera Montero was consistent when he gave two red cards for similar challenges, but then threw that out of the window for Lenglet’s challenge. 6

Barcelona move to within a point of Real Madrid, but Los Blancos have a game in hand.

The loss for Espanyol means that they stay on 24 points. They have a gap of 10 points (at least) to cover up with 3 matches to go; they have been relegated.