Valladolid hosted Barcelona at the José Zorrilla Stadium, with the visitors knowing that any slip-up would certainly hand the La Liga Title to Real Madrid. 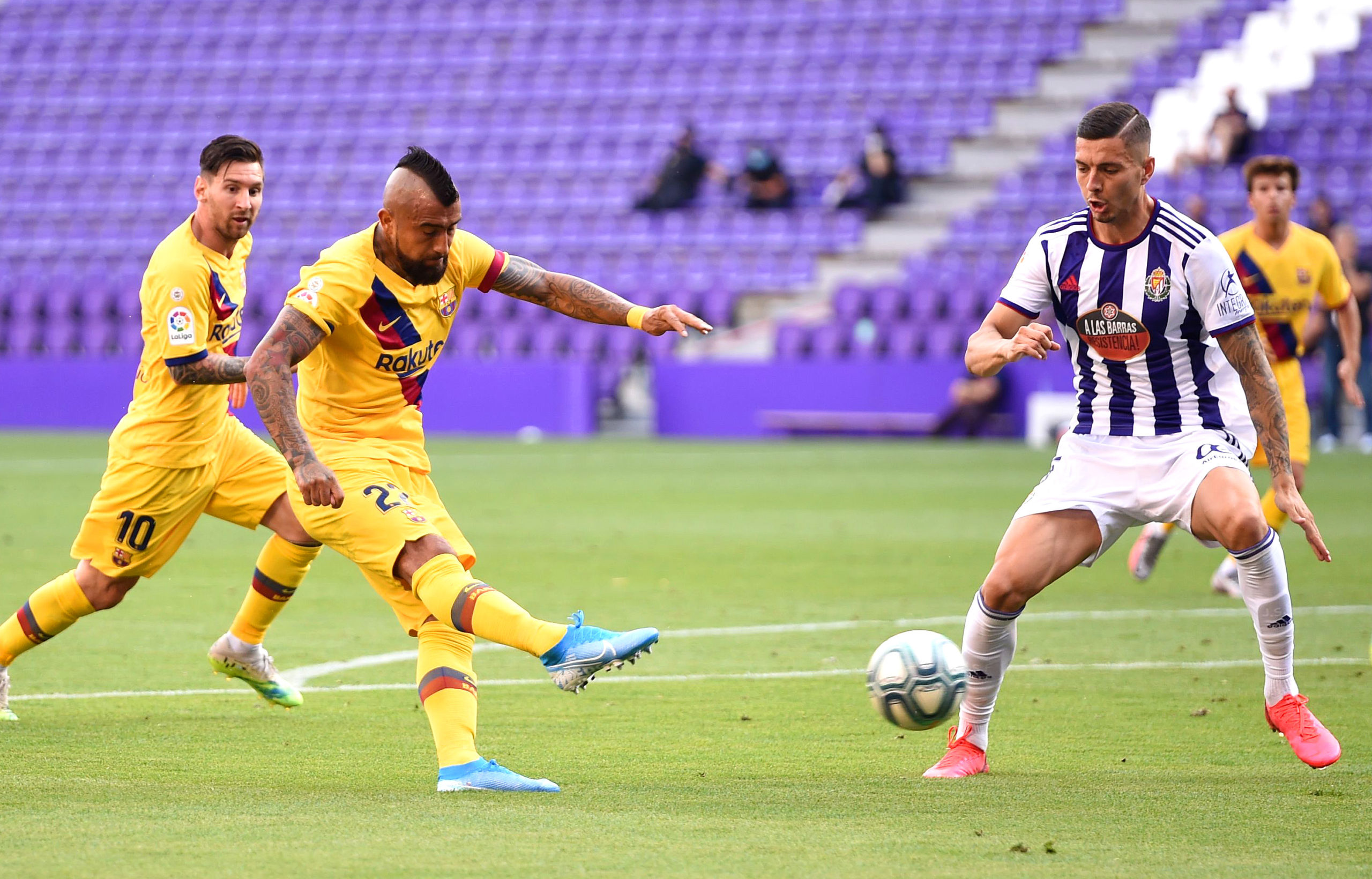 Barcelona dominated possession from the very beginning, and finally broke through in the 15th minute. After some passing in congested spaces near the edge of the box, Messi stabbed it to Vidal, who put a foot through it and found the bottom corner.

Four minutes later, Semedo’s cut-back went past two defenders before reaching Griezmann, but the Frenchman scuffed his shot and put it miles wide.

Then, in the 24th minute, Busquets found Semedo in a lot of space on the right. The Portuguese international went for goal, but Masip was equal to it.

Valladolid finally had a massive chance in the 36th minute as Pérez went through on goal, but he lunged at it and scuffed his shot into ter Stegen.

They looked better after the break, and almost got a goal in the 60th minute when Hervías’s free-kick was headed on by Ünal, but ter Stegen kept it out

Valladolid came close again when Ramírez had a hit from a tight angle on the left, but ter Stegen kept it out.

So, Barcelona managed to hang on, and it ended 0-1 to the Blaugarana.

Valladolid tried to sit deep and absorb the pressure, before breaking away through ground passes, and crossing into the box. They later switched to a 4-4-2 to counter Barcelona’s three-man defence.

Setién sprung a tactical surprise when he played with a back three in possession, as Roberto dropped deep to play alongside Piqué and Lenglet, allowing the full-backs to push far forward – almost like wing-backs. After Valladolid changed to a 4-4-2, they too switched to a four-man backline, but that didn’t work, and they were forced to revert to their original shape.

Jordi Masip – Made quite a few good saves to keep his side in the match. 7.5

Javi Moyano – Defended well on the right, but couldn’t get forward. 6

Javi Sánchez – Good in defence, as he did his best to keep Barcelona’s attackers away from his goal. 6.5

Raúl García – Failed to stop Semedo from overrunning him on the left, and had to be taken off early on after picking up an injury. 4

Fede San Emeterio – Failed to have a major impact in midfield. 4.75

Joaquín Fernández Moreno – His distribution was decent, but he didn’t have a real impact. 4.5

Rubén Alcaraz – Tried his best to make things happen, but couldn’t do too much. 4.5

Kike Pérez – Typical box-to-box performance from him, as he made a lot of crucial interceptions at the back and made a couple of good chances in attack. 7.75

Sergi Guardiola – Worked hard up front as he created a few good chances, but he was alone for most of the first period. 6.5

Óscar Plano – Didn’t do too much except creating a chance or two. 5.5

Nacho – Much better than García on the left, as he kept Semedo in check and delivered a few good crosses. 6.75

Enes Ünal – Had a very good impact after coming on, as he got into good shooting positions, and hit the target too. 6.75

Pablo Hervías – Delivered a lot of (10) crosses from midfield, but many of them didn’t find their man. 5.75

Sandro Ramírez – Got into decent positions, but his final balls were poor. 4.75

Team – Valladolid were completely outclassed in the first half, but they did well to hold on and only concede once. Their half-time substitutions were absolutely brilliant, and they were undoubtedly better thereafter. They created a lot of good chances, and but for ter Stegen, they would certainly have equalised. There were very promising signs in this performance, and they should be happy about it. 6.25

Marc-André ter Stegen – Made a lot of crucial saves to preserve his clean sheet. 8

Nélson Semedo – Had a lot of freedom down the right as he got in behind quite often, but couldn’t replicate that in the second period. 7.5

Gerard Piqué – Great in defence, as he made 11 clearances to keep his side in front. 8

Clément Lenglet – Alright at the back, as he tried to keep things clean. 6.25

Jordi Alba – Decent down the left, but he failed to have an attacking impact. 5.75

Sergio Busquets – Very good in holding midfield yet again, as his defending and distribution was great. 7

Sergi Roberto – Showed off his versatility in a brilliant performance, as he excelled at centre-back, in midfield and down the right. 7.5

Riqui Puig – Worked hard in midfield as he made a lot of recoveries there. 6.5

Arturo Vidal – Battled hard in midfield, and scored a very good and crucial goal too. 7.75

Lionel Messi – Had a few sights of goal, but didn’t really threaten the keeper. Did well to get the record-breaking assist, though. 7

Antoine Griezmann – Got into some promising positions, but his end-product left a lot to be desired. 4.75

Luis Suárez – Looked very much off-pace after coming on, as his touches were very loose and poor. 3.5

Ronald Araújo – Did alright in defence after he was sent on. 5.75

Ivan Rakitić – Decent in midfield after he came on, and he helped out at the back too. 5.75

Junior Firpo – Not too bad off the bench, as he supported his defence. 5

Team – Barcelona looked brilliant in the first half, and it seemed to be a tactical masterstroke which would help them march off to victory. Despite creating a lot of chances, they only scored once. After half-time, Valladolid’s changes looked to be a deciding factor, but Barcelona managed to hold on and stumble over the finish. It was not the most convincing of performances, but they got the job done. 6.5

Antonio Mateu Lahoz had a relatively simple match, and got most of his calls right. 7

Valladolid stay in 14th place, and are 7 points clear of the relegation zone.

Barcelona close the gap to Real Madrid to just one point, but once again, Los Blancos have a game in hand.