Mallorca hosted leaders Barcelona at the Son Moix Stadium for the first match after the restart for both sides. Barcelona needed the points to keep Madrid at bay up top, but the hosts are fighting at the opposite end, and wouldn’t pass on any points easily. 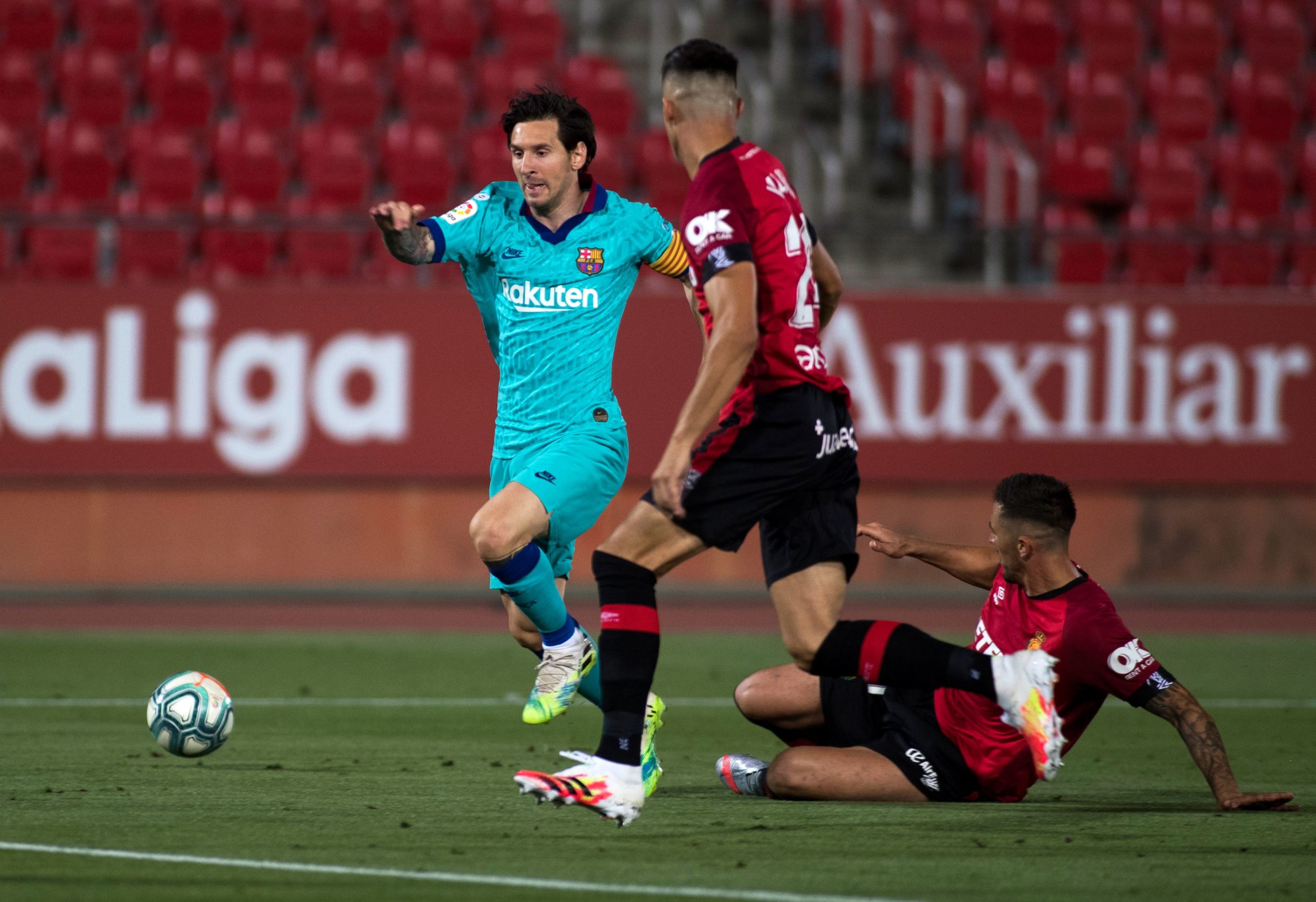 Only 65 seconds into the match, Vidal headed Alba’s cross into the net to give Barcelona the lead.

The Catalans dominated possession thereafter, and in the 37th minute, Messi headed Alba’s cross down for Brathwaite, and the Dane smashed it into the net on the half-volley to open his Barcelona account.

Mallorca were promising at the start of the second period, but they failed to score.

They were punished for that in the 79th minute, when Messi played Alba through with a ball over the defence, and the Spaniard slotted it home.

Barcelona capped it off in the 93rd minute, when Messi found the ball on the edge of the box and cut to his right foot past three defenders, and scored with his right leg.

So it ended 0-4 to the league-leaders, who leave Mallorca with a 5 point lead over Madrid.

Mallorca could do nothing but absorb the pressure and try to deal damage on the counter, but they failed to cause too much trouble.

Barcelona, as always, kept a lot of possession, and looked to break through Mallorca’s rigid defensive lines through incisive passes. They pushed their full-backs far up the pitch too, and they tried to deliver crosses from the byline.

Manolo Reina – Made a few decent saves, and was rather unfortunate to concede 4. 5.5

Alejandro Pozo – Couldn’t contain Alba defensively, but he went forward a few times, and his crossing was good too. 6

Martin Valjent – Battled hard at the back and won a few headers, but couldn’t stop the goals. 5.5

Julio Pleguezuelo – Not bad in defence, but failed to keep Barcelona’s attackers quiet. 5

Joan Sastre – Decent at left-back, as he did well to keep Roberto relatively quiet in attack. 6

Takefusa Kubo – Gave Alba one or two headaches, and was his side’s most potent attacking threat. Forced a couple of saves out of Ter Stegen too. 6.75

Marc Pedraza – Not bad in the middle of the park, as he helped his side out in defence. 5.5

Salva Sevilla – Did well in midfield to hold out against his Catalan compatriots. He made a lot of interceptions, and his passing was decent too. 6.75

Daniel Rodríguez Vázquez – Decent in midfield, as he tried to string his side’s attacks together. Delivered one or two decent crosses, but didn’t manage to trouble Barcelona’s goal. 5.75

Cucho Hernández – Worked hard in front to create a chance or two, but failed to do so. 4.75

Ante Budimir – Won a lot of headers after his defence had cleared, but he had no one in support. Came close to scoring as well. 6

Fran Gámez – Decent down the left like Sastre, but failed to get forward. 6

Lago Junior – Failed to have a major impact up front. 4.75

Iddrisu Baba – Strong defensively after he came on. 5.5

Team – Mallorca did not look bad at all, and they even managed one more shot than Barcelona overall. They were unlucky to ship four goals, but in the end, it was the gulf in quality that cost them. They can take a few positives from the match, though. 6.25

Marc-André ter Stegen – Made a few important saves and his distribution was great. 6.5

Sergi Roberto – Good defensively, and he got forward too, but he failed to create anything substantial. 6

Gerard Piqué – Very good at the back, as he kept things tight and won most of his headers. 6.75

Ronald Araújo – Strong at the back, as he won a lot of second balls and kept Mallorca’s forwards away from goal. Even found the woodwork with an effort. 7.25

Jordi Alba – Wreaked havoc down the left flank. He got forward very often and delivered deadly crosses. Got a goal and an assist, and he was decent defensively too. 7.75

Arturo Vidal – Opened the scoring with a great header, and was decent in midfield. 6.5

Sergio Busquets – Decent in midfield, but he failed to make too much happen up front. 6

Lionel Messi – Decent performance even by his standards, after 3 months without football. He pulled the strings from deep, and bar some loose passes, his vision was great. A late goal and two assists for the Argentine. 8

Martin Braithwaite – Did well to take his chance and get his first Barcelona goal. He was decent for the rest of the match too, as he tried to link up his side’s attacks. Helped out defensively too. 7.5

Antoine Griezmann – Failed to have any real impact on the match, as his gameplay was rather loose. 3.75

Ivan Rakitić – Decent in midfield in the second half, as he did well defensively. Failed to do too much up front, though. 6.25

Luiz Suárez – Worked hard up front, and though he failed to turn up in front of goal, he did get an assist for the last goal. 6

Nélson Semedo – Failed to do too much at right-back. 5.25

Arthur Melo – Decent in midfield, but had no major impact. 5

Team – Barcelona were better right from the start, and clinical in front of goal. Ter Stegen wasn’t troubled, and Messi looked amazing. A very strong performance and statement from the Blaugrana, and the onus is firmly on Real Madrid to respond. 7.5

Carlos del Cerro Grande didn’t have too many tough decision to make, but he was right most of the time. 7.25

The Pitch Invader: Even in these times, a man found a way into the stadium, and all the way on to the pitch. He wanted a selfie with Alba, but obviously didn’t get it. Such actions are strongly not recommended. -10

Mallorca stay 18th, a point away from Celta Vigo who are above them, and two clear of Leganés and Espanyol who are below.

Barcelona, on the other hand, extend their lead at the top to 5 points until Madrid play.