Madrid hosted Mallorca at the Alfredo Di Stéfano, hoping for a win which would take them back up to the summit of the La Liga table. 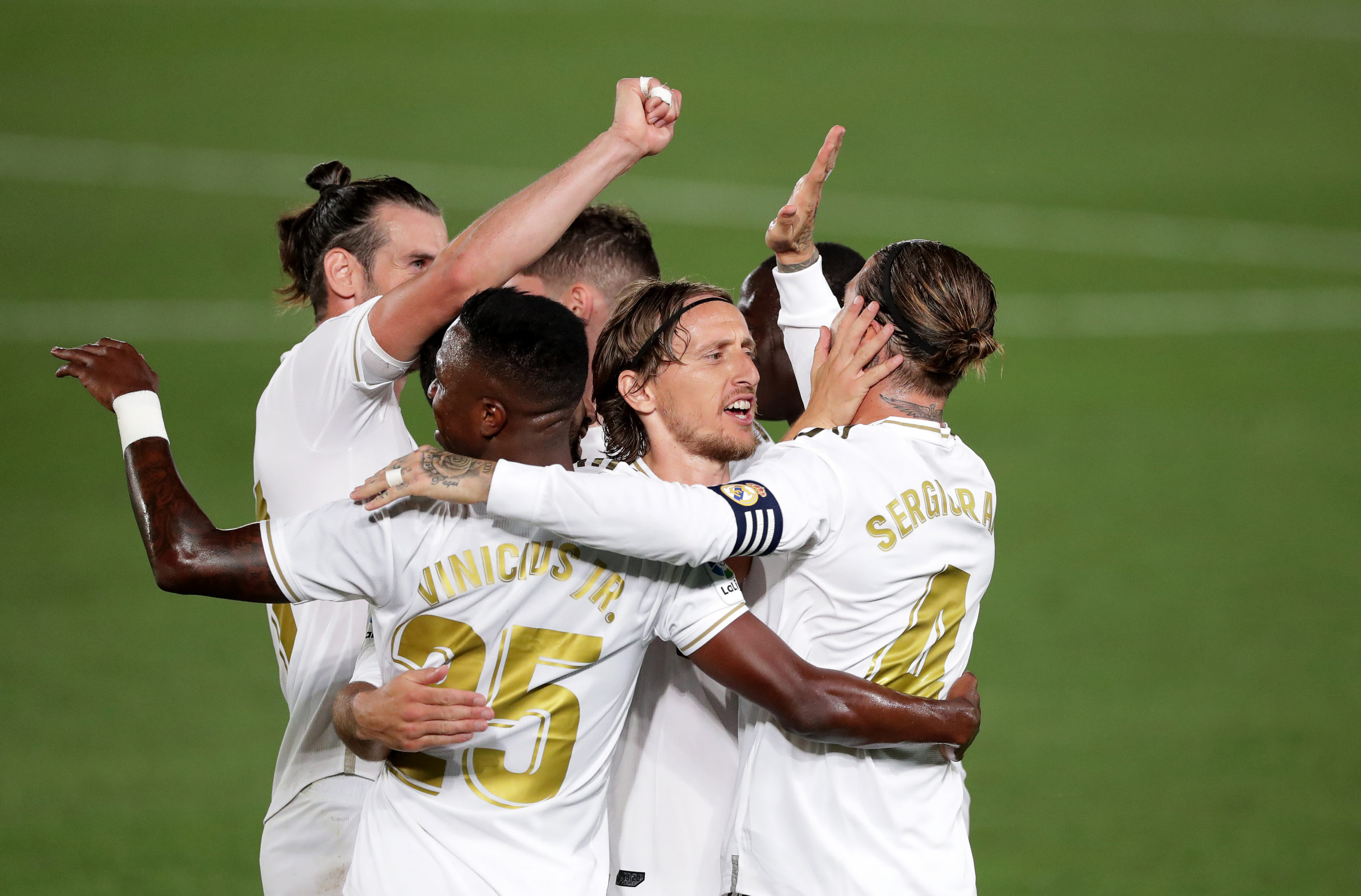 Real had the first chance in the 7th minute, as Benzema smashed one from close range after Mendy’s cross found him, but Reina made a great save. After the half-clearance, Bale tried his luck from range, but Reina was there once again.

4 minutes later, Baba hit one from quite a distance, but Courtois made a diving save to keep it away from the bottom corner.

It was Los Blancos who took the lead in the 19th minute. Modrić cut inside from the left, and played a ball through to Vinícius, who delicately chipped it over Reina.

5 minutes later, Benzema played Vinícius through on goal. The Brazilian tried another chip, but this time it came out off the crossbar.

Mallorca looked good for the rest of the first half, but they didn’t create any chances.

7 minutes after half-time, Vinícius ran down the left wing and found Benzema, but the Frenchman’s shot was straight at Reina.

And then, in the 56th minute, Ramos took a free-kick from the edge of the D, and found the top corner.

3 minutes later, Lago found Budimir with a cross, but the Croatian’s header was straight at Courtois.

Nothing much happened thereafter, and so it ended 2-0 to the hosts.

Mallorca didn’t shy away from pressing, especially after going a goal down. But that had its side-effects, as it left a lot of spaces in their own half.

Thibaut Courtois – Wasn’t overly troubled, but he made one or two good saves to earn the clean sheet. 6.5

Dani Carvajal – Didn’t do too much down the right, but he wasn’t bad. 6

Raphaël Varane – Did very well in defence as he tried to track Kubo. 7

Sergio Ramos – Solid at the back, and he scored a beautiful free-kick. Arguably lucky to stay on the pitch, though. 7.25

Ferland Mendy – Went far forward in attack, and put in a few good crosses from the left. 7

Federico Valverde – Not great in holding midfield, as he left lots of spaces for Kubo to work with. 4.5

Luka Modrić – Decent in midfield, and got a good assist for the opener too. 6.25

Gareth Bale – Good down the right, as he tried his luck from range a couple of times and helped out defensively. 6.5

Eden Hazard – Made a couple of chances, but had minimal impact. 4.75

Vinícius Júnior – Very good in attack, as he got a goal and hit the crossbar once. Looked lively down the left too. 7.75

Karim Benzema – Good up front, as he linked up well with the other attackers. 6.5

Toni Kroos – Didn’t manage to do too much except creating one chance. 5

Marco Asensio – No impact off the bench. 4.5

Team – Real started the game well, and went in front with a good goal. They were subject to good pressure from Mallorca, but did well to keep the visitors away from goal. After Ramos doubled their advantage, they sat back and cruised to victory. Relatively straightforward win for them. 6.5

Manolo Reina – Made quite a few good saves, but couldn’t keep the goals out. 6.75

Martin Valjent – Alright at the back, but didn’t have a major impact. 5

Julio Pleguezuelo – Decent in defence, but he failed to stop the Madrid forwards at times. 5.75

Aleksandar Sedlar – Made a few good challenges, but wasn’t able to do too much at the back. 6

Alejandro Pozo – Had no impact down the right. 3.75

Dani Rodríguez – Created a couple of good chances, but couldn’t do too much. 5.25

Iddrisu Baba – Worked hard in midfield, but didn’t have a major effect in attack. 5.5

Aleix Febas – Failed to have any impact in midfield or attack. 4

Lago Junior – Looked very threatening down the left, and delivered quite a few threatening crosses. 6.75

Ante Budimir – Had a couple of chances, but was rather sloppy at times. 4.5

Takefusa Kubo – Another lively performance from the ‘Japanese Messi’. He looked untouchable on the ball, and created quite a few good things in attack. 7.25

Cucho Hernández – Made a few threatening moves in the Madrid box, but didn’t get a real chance. 5.25

Salva Sevilla – Decent in midfield, but couldn’t affect the match up front. 5

Yannis Salibur – Had no impact off the bench. 4.5

Team – Mallorca started well, and can count themselves slightly unlucky to go behind. Even then, they kept pushing, and almost got an equaliser before half-time. Unfortunately, they found themselves two goals behind at the other side of the break. After that, they looked a bit lost and clueless, and didn’t manage to do too much. 6

Mario Melero López was officiating a Real Madrid match, so controversies were inevitable. The two major incidents were the push before the first goal, and Ramos not getting a second yellow card. Both were debatable, but I personally feel that the goal should have stood and Ramos shouldn’t have been on the pitch. At least it was not as bad as the Benzema-handball incident. 6.5

Luka Romero – The Argentine became the youngest player to appear in the La Liga when he was brought on for the last 9 minutes. Expect a lot of good things from him in the future.

Real go back up to the top of the table, and are level on points with Barcelona yet again.

Mallorca stay in 18th, and remain 3 points away from safety.