Levante Leave it Late to Rescue a Point Against Sevilla 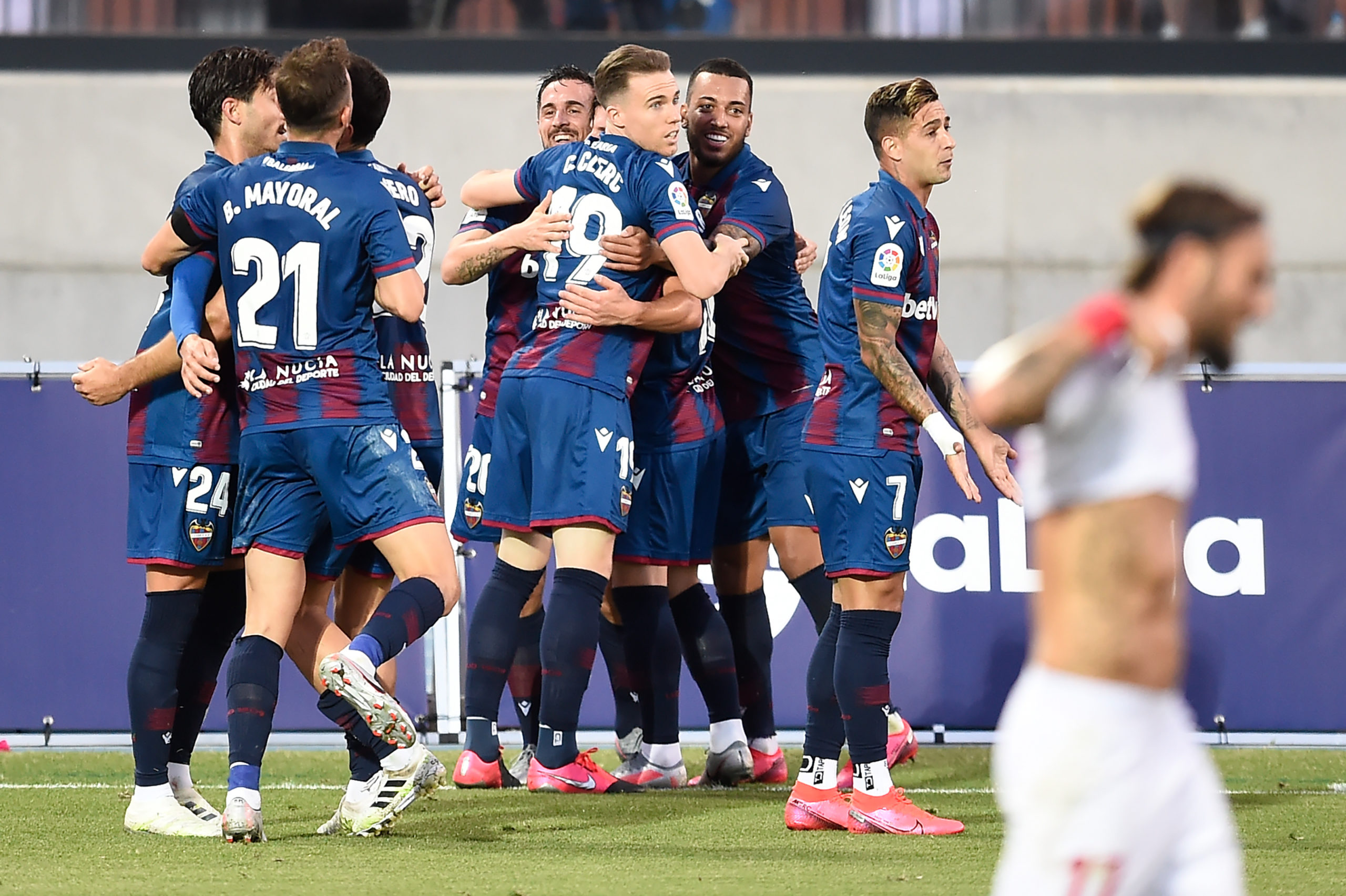 Sevilla almost went ahead in the 15th minute, when Munir struck the crossbar from a free-kick.

Neither side could threaten the goal thereafter, and so, it was scoreless at the break.

But it took Sevilla less than a minute in the second half to go in front, as Diego Carlos found Munir with a long ball, who squared it for De Jong, and the Dutchman put it into the net in the 24th second.

Sevilla defended well thereafter, and held on to the lead until the 87th minute, when Kounde denied Hernâni on the line.

But only a minute later, Miramón’s cross (which was on target) took three deflections – most notably off Carlos after Vaclík parried it into his knee, and then bounced into the net.

So finally, it ended 1-1, as Sevilla were punished for their failure to score a second goal.

Sevilla looked to press high, and prevent Levante from keeping the ball for too long.

Levante looked to break the press using long balls and incisive through balls for their strikers, who got into good positions. Unfortunately for them, they missed by mere centimetres most of the time.

Aitor Fernández – Didn’t have too much to do, and can’t be blamed for the goal. 5.75

Coke – Looked very good on the ball, and he caused a few problems for the Sevilla defence. 6.5

Bruno González – Decent at the back, as he kept the Sevilla forwards away from goal. 6.25

Rúben Vezo – Solid at the back, as he made a lot of crucial clearances. 7

Rubén Rochina – Decent down the right, but failed to make things happen. 5.5

Gonzalo Melero – Not bad in the middle of the park, but couldn’t do anything at either end. 5.5

Nikola Vukčević – Was decent in holding midfield, but failed to have an impact on either end. 5.75

José Campaña – Looked great in midfield, as he made a few key passes and created chances for his side. 6.5

Borja Mayoral – Drifted wide often to receive the ball. Put in a few threatening balls and made a few good runs, but failed to turn up in front of goal until the last 5 minutes. 6.25

Jorge Miramón – Off the bench, and onto the score-sheet with a very interesting goal. Decent down the right too. 6.5

Enis Bardhi – Didn’t have an impact in midfield. 5

Hernâni Fortes – Threatened a bit up front, and almost got a goal but for Kounde’s goal-line heroics. 6.25

Sergio León – Couldn’t do anything in attack. 4.75

Team – Levante were very good in the first half, as they kept Sevilla away from goal, and created a few chances too. They had a good plan and stuck to it well. However, they left the dressing room 24 seconds late for the second period, and by that time they had conceded. They were pretty clueless after that, but somehow managed to get an equaliser. And thereafter, they were very close to winning it too, but couldn’t score. 6.75

Tomáš Vaclík – Didn’t have too much work to do, but made an important save late on. 6

Jesús Navas – Great down the right side, as he industriously patrolled the flank. His crosses were decent too. 6.5

Diego Carlos – Was good at the back, particularly in terms of distribution. Played an important long-ball to Munir for the goal. Rather unlucky in the goal. 6.75

Jules Koundé – Strong at the back as always, and made a massive block on the line. 6.75

Sergio Escudero – Good down the left, but failed to go forward. 6

Joan Jordán – Was good in midfield, and his distribution was great. 6.75

Nemanja Gudelj – Decent in holding midfield, where his distribution was exceptional. 6.75

Éver Banega – Looked very confident on the ball, as he strung his side’s moves together from midfield. 6.5

Luuk de Jong – Rather loose in the first half, but he got into a good position for the goal. 6.25

Munir El Haddadi – Came very close to scoring when he hit the woodwork from a free-kick. Got a great assist for the opener. 7

Suso – Saw a bit of the ball up front, but couldn’t make anything happen. 5.25

Óliver Torres – Decent in midfield, but his final ball was loose. 5.75

Fernando – Had no impact on the match. 4

Youssef En-Nesyri – Failed to do anything up front. 4.25

Team – Sevilla were good in the first half, as they pressed high and pinned Levante in their own half. After taking the lead in the second, they looked good, but couldn’t cement the victory with a second. That’s what cost them, as they conceded a scrappy goal late on. 6.75

Alejandro Hernández Hernández had a relatively simple day at the office, and he’ll be pleased about it. 7.5

Levante stay in 12th place, but now, they are level on points with Osasuana.

Sevilla also hold position – they are 3rd – 8 points behind Real Madrid in second, and 4 above Real Sociedad.