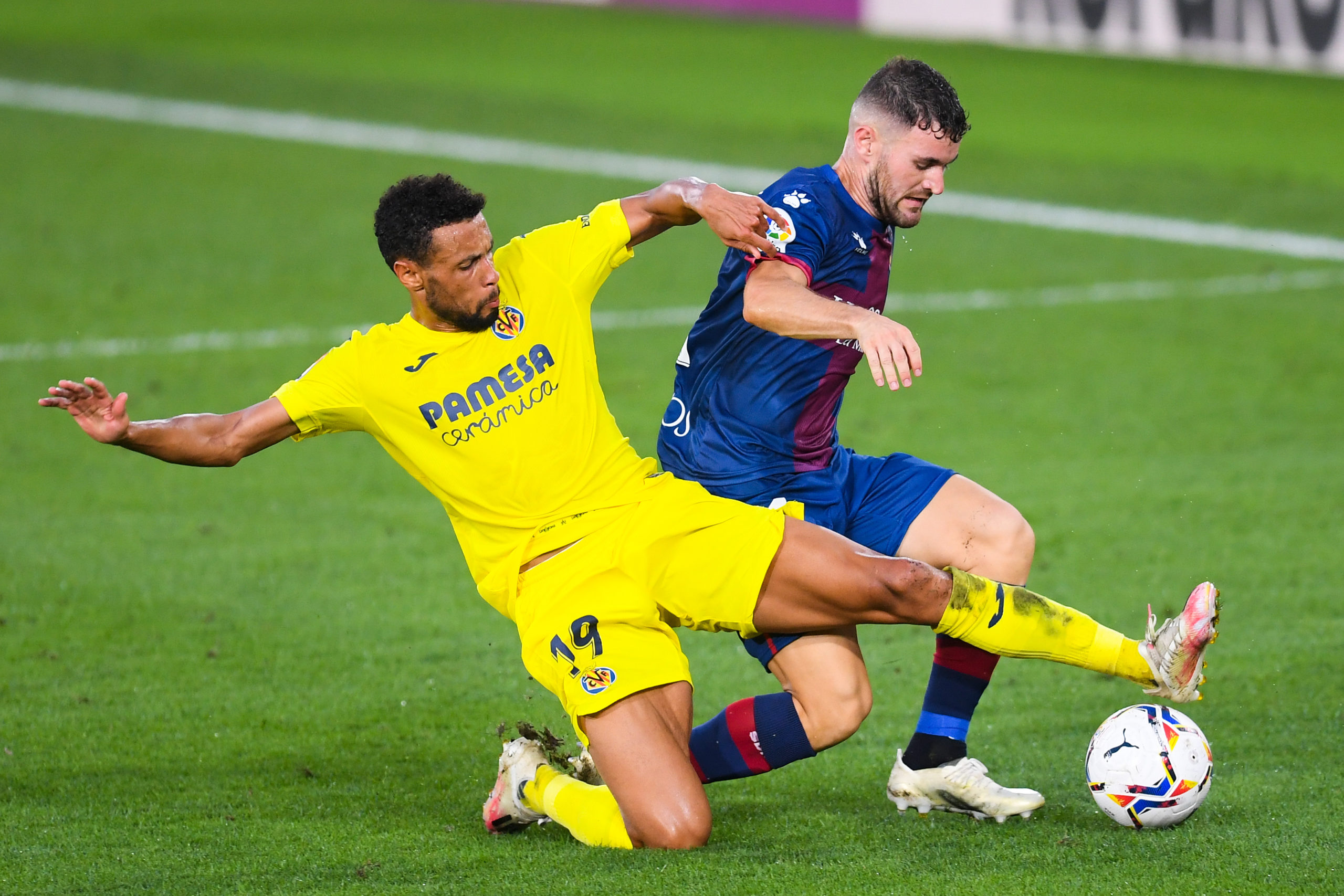 Spanish football returned for the 2020/21 season with La Liga kicking off as the second of Europe’s big five leagues to get the new season underway. Here’s all the action from matchday 1:

Eibar and Celta kicked off the 2020/21 campaign of the La Liga on Saturday.

The visitors created the first big opening of the match, as Iago Aspas squared a ball to Nolito, who let fly from the edge of the box, but could only draw a save out of Marko Dmitrović.

Both sides tried their luck thereafter, but neither could really trouble the opposing keeper until the 55th minute, when Pedro Bigas had a hit on the half-volley from range, but only hit the side-netting.

The last notable action of the game saw Papakouli Diop receive a second yellow card for kicking Santi Mina in the 87th minute, meaning that the first sending off of the new season came in the very first match. Celta couldn’t capitalise though, and the match ended without a goal.

Marko Dmitrović – Eibar’s keeper was easily the best player of the match, as he saved his side on multiple occasions. He finished the match with 100% save percentage, and of course, a well-deserved clean sheet. Solid stuff from the 28 year-old.

Granada and Athletic Club were up next in a match that could prove to be a prelude to the European battle.

After a cagey first half where neither side was able to create a proper opening, Granada took the lead in the 48th minute as Yangel Herrera headed Ángel Montoro Sánchez’s wicked cross in.

Four minutes later, they doubled their lead. Luis Milla intercepted a poor pass just outside the attacking third, and he dribbled to the edge of the box before finding the bottom corner with a great finish.

Bilbao’s hopes for a goal were slim as they failed to fashion any major openings, and Granada managed to take a 2-0 victory.

Luis Milla – The scorer of the second goal was consistent in midfield, as he won 4 aerial duels, made 3 interceptions, won as many free-kicks and completed two dribbles. A metronomic display from the Spaniard

The last match on Saturday saw new-boys Cádiz host Osasuna, who were among the surprise stories of the previous campaign

Los Rojillos got off to a brilliant start, as Oier Sanjurjo slipped Adrián López through on goal with a slick pass in behind the defence. The forward beat the keeper with a delightful finish, and Osasuna took the lead.

Cádiz came close to equalising soon thereafter, as Jorge Pombo was on the end of a cross. He hit it on the volley, and narrowly missed the top corner.

Both sides soon settled down, and the next major spell of one-sided pressure came after the 70th minute, as Cádiz pushed for an equaliser. Jorge Pombo came closest again, this time with an effort from the edge of the box which looked destined for the bottom corner, but was saved.

But it was Osasuna who scored again, as a long throw caused all sorts of problems in the Cádiz box. Lucas Torró flicked it on for Rubén García, who struck it on the half-turn and rippled the back of the net. The visitors were able to control the match thereafter, and earned a deserved victory.

Jorge Pombo – The 26 year-old did all that he could to help his side score a goal, as he finished the match with 4 shots, as many dribbles, 3 key passes, 3 free-kicks won and 3 tackles. The goal was the only thing that eluded him.

Manuel Pellegrini’s first match in charge of Real Betis saw them travel to Alavés, who also had a new manager in Pablo Machín.

The visitors looked to be the better side early on, and they nearly scored at the half-hour mark. Emerson pulled it back for Guido Rodríguez, who let fly from about 25 yards out, but only hit the crossbar.

Claudio Bravo hadn’t been troubled in the first half of his Betis debut, but three minutes into the second, he was forced to make a smart save as a corner was headed towards him. The loose ball was met by Víctor Laguardia, who somehow missed wide from about four yards out.

At the hour mark, the woodwork was rattled again, this time from a Sergio Canales free-kick from similar range.

Betis’ hard work was rewarded in the 94th minute, as Cristian Tello found the bottom corner from the edge of the box after a short corner was worked out to him.

Emerson – Real Betis’ right-back was commanding on the flank, as he controlled proceedings in both attack and defence. He finished the match with 6 fouls drawn, 5 key passes, 5 tackles, 3/3 accurate crosses and as many interceptions. Reliable stuff from the defender.

Valladolid and Sociedad squared off later on Sunday for the first match of their respective seasons.

Valladolid were the better side early on, and they somehow didn’t score in the 19th minute. A saved shot fell to Sergi Guardiola, whose effort was blocked on the line by Diego Llorente. Waldo Rubio had a hit too, but it came back out of the post.

The home side finally took the lead in the 39th minute, as Sergio Guardiola burst past a defender on the right and squared it for Míchel, who tapped in.

Sociedad’s equaliser was a gift from Jordi Masip, who let Roberto López’s free-kick, which was missed by everyone else, slip past him. El Real couldn’t find a winner, so the match ended 1-1.

Mikel Merino – Sociedad’s 24 year-old midfielder was commanding in the middle of the park, as he won 8 aerial duels, made 3 clearances and as many tackles plus interceptions while also completing 5/7 long passes. A battling performance from the Spaniard.

Villarreal hosted newly-promoted Huesca for their first assignment of the 2020/21 campaign.

The home side threatened in the opening stages, and they thought that they had scored in the 22nd minute. A wicked free-kick was headed on by Gerard Moreno, whose effort was pushed away by the keeper. Raúl Albiol was at hand to head it in on the rebound, but he was offside.

After surviving that scare, Huesca went and took the lead in the 42nd minute. A very slick passing move saw Juan Carlos spread the ball to the right, from where Pablo Maffeo took a touch to come inside before firing into the bottom corner.

Villarreal pushed for an important equaliser, and they had a great chance in the 68th minute from the penalty spot after the ball struck the arm of Pablo Maffeo. Gerard Moreno stepped up, and brought his side back level. There were no more goals thereafter, so the match ended in a draw.

Gerard Moreno – The 28 year-old did all that he could to score, and finally succeeded from the spot. He finished the match with 5 dribbles completed, 3/6 shots on target, 3 many fouls drawn and as many aerial duels won.

The final clash of Matchday 1 saw Valencia and Levante square off.

The hosts didn’t start too well, and conceded in 34 seconds after an intercepted pass broke for José Luis Morales, who wriggled past the defence before slotting home.

Valencia regrouped, and about 11 minutes later, Gabriel Paulista’s header after a corner squeezed in at the near post to make the scores level again.

Levante were not done though, as they netted in the 18th minute after a great scrap in the Valencia box, but it was ruled out for handball. Another 18 minutes later, however, they were not to be denied as José Luis Morales faked a shot and brought the ball onto his right foot before finding the net from centre of the box.

Valencia took only three minutes to respond, as Lee Kang-in slipped Maximiliano Gómez through on the left, and the Uruguayan forward finished brilliant.

The next goal came in the 75th minute, as Denis Cheryshev’s low cross found a way to reach Manu Vallejo, who turned and finished from twelve yards out.

The Spaniard was at the double in the fourth minute of stoppage time as he turned it in on the rebound after Maximiliano Gómez’s chip came out off the post. So, his side triumphed 4-2

Manu Vallejo – As far as substitutions go, this is about as good as it gets. Manu Vallejo came on in the 71st minute, scored within four minutes of that and added a second late on with only 3 attempts, all of which were on target. Proper efficiency from the 23 year-old.