Celta Claw Back to Take a Point Off Barcelona

Celta Vigo hosted Barcelona at the Estadio de Balaídos, with the visitors looking to go to the top of the table with a win. 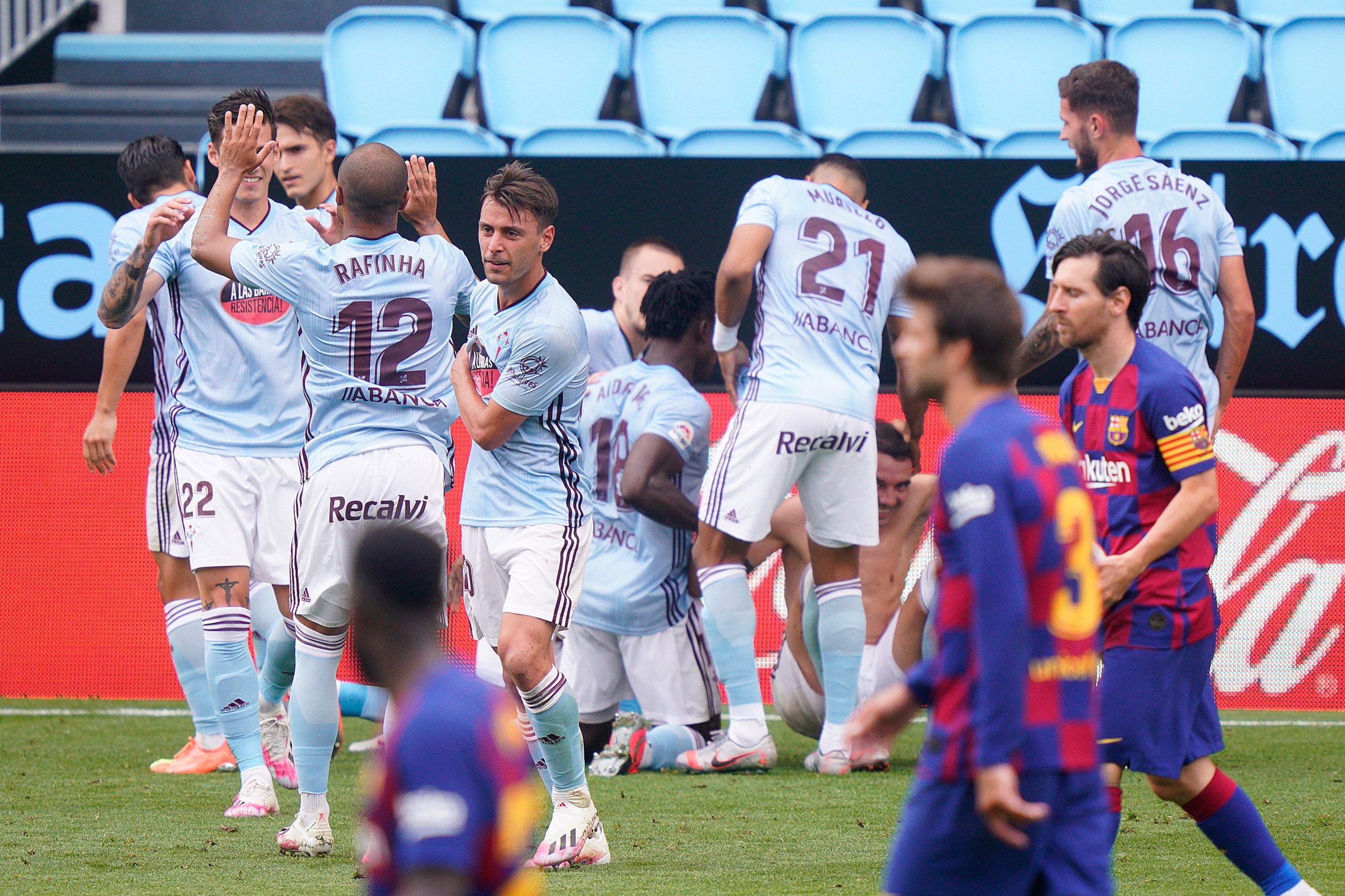 Barcelona had a massive chance in the 6th minute through Piqué, who had a free header after Messi’s corner. However, he only managed to rattle the crossbar.

The visitors had a free-kick 21m away from goal in the 20th minute. Messi took it as if he was going to shoot, but ended up chipping it to Suárez, who headed home from point-blank range.

Celta almost equalised a minute later when ter Stegen made an uncharacteristically loose pass. Smolov hit his shot while falling down, but he should have looked for Aspas who was through on goal.

Then, Celta hit the post in the 24th minute. Suárez found Méndez with a through ball. The Spaniard’s shot took slight deflection off ter Stegen, and came out after hitting the post.

Messi had a massive chance in the 40th minute after Barcelona won the ball back in midfield. He had the whole net to aim for from the edge of the box, but he failed to hit the target.

Celta were back level in the 50th minute. Rakitić had his pass intercepted in midfield, allowing Aspas to find Yokuşlu. The Turkish midfielder squared it for Smolov, who simply had to score.

Barcelona wanted a penalty at the other end when Messi took a whack after skying a shot, but neither the referee nor VAR were impressed.

In the 67th minute, Messi squared a pass to Luis Suárez after Denis Suárez was dispossessed. The Uruguayan somehow managed to turn and squeeze a shot into the bottom corner, and out of nowhere, Barcelona were in front.

In the 80th minute, Aspas found Nolito in the box with a backheel. The former Barcelona man tried to find the bottom corner, but ter Stegen kept his shot out.

Celta had a free-kick in the 88th minute after Piqué brought Rafinha down. Aspas curled it around the wall, leaving a perplexed ter Stegen to think about where he misplaced his players.

Nolito had a massive chance in the 94th minute when Suárez found him with a half-open goal, but ter Stegen kept the shot out.

So, it ended 2-2, with Barcelona dropping yet more points away from home.

Celta were set up to be compact defensively, and were not afraid to push forward whenever they could. They also tried to pass their way through Barcelona.

Barcelona dominated possession, but their poor finishing cost them.

Rubén Blanco – Had very little to do as most of Barcelona’s shots were off target. 5

Joseph Aidoo – Very solid at the back, and he went forward at times too. 7

Néstor Araujo – Made a host of challenges and clearances to keep his side in the match. 6.75

Kevin Vázquez Comesaña – Did well on the right to keep Fati in check. 6.5

Brais Méndez – Good in midfield, as he defended well, and created a few chances in attack. He was very unfortunate to hit the post as well. 6.5

Okay Yokuşlu – Brilliant in the middle of the park. He looked lively at both ends, and got a very good assist for his side’s first goal. 7.25

Denis Suárez – Looked very skilful on the ball, as he helped his side go forward. The only mistake he made was when he was dispossessed before Barcelona’s second goal. 7

Jacobo González Rodrigáñez – Very good debut for him. He was solid down the left, and kept a watch on Semedo. 6.25

Iago Aspas – Absolutely brilliant up front. He brought a lot of ingenuity and creativity to his side, and scored a brilliant goal late on. 8

Fyodor Smolov – Had a few good chances, and did well to take one of them. 6.5

Filip Bradarić – Decent at the back after he came on. 6

Nolito – Looked alright after he came on, and he should have scored in the last minute to win it for his side. 5.75

Rafinha – Extremely lively after he came on. Troubled the Barcelona defence a lot, and won the free-kick for the last goal. 6.75

Jeison Murillo – Didn’t do too much after coming on. 4.75

Team – Celta Vigo were brave against Barcelona. They started well, and although they went behind, they never looked down. After getting an equaliser in the second half, they conceded a soft goal to trail once again. But they kept pushing, and pulled yet another equaliser out of the bag. They could have even won it late on, but they won’t mind the draw. 6.75

Marc-André ter Stegen – Made a lot of excellent saves, but his distribution was uncharacteristically loose. 6.5

Nélson Semedo – Alright on the right flank, but his final ball was not good. 5.75

Gerard Piqué – Good at the back, and he almost scored when he hit the woodwork early on. Gave away a needless free-kick which led to the late goal. 6

Samuel Umtiti – Tried his best to boss the midfield, but someone needs to remind him that he is a centre-back. Left a lot of gaps at the back because of that. 5

Jordi Alba – Didn’t manage to have a major impact on the left. 5.25

Ivan Rakitić – Created a few good chances for his side, and he looked good defensively too. The one mistake he made was when he misplaced his pass, allowing Celta to get their first goal. 7

Riqui Puig – Yet again he was Barcelona’s most lively midfielder. Brought a lot of creativity and energy to the midfield, and he worked hard as he was all over the place. 7.5

Lionel Messi – Although he got two good assists, the Argentine didn’t look good. He refused to get his 700th goal, and he seems to have lost his shooting boots. Not too great from the magician. 6.5

Luis Suárez – The Uruguayan was kept rather quiet throughout the match, but he was afforded two chances, and he took both of them. 8.25

Ansu Fati – Made quite a few good runs down the left, but didn’t have any impact in front of goal. 6.25

Martin Braithwaite – Did nothing except picking up a yellow card. 4.25

Team – Barcelona did not look good on this occasion. Bar two moments of brilliance, they looked very lacklustre. The Blaugarana‘s defence was missing in the second half, and they have to thank ter Stegen for keeping them in the match. This performance does not deserve a La Liga title. 6

Guillermo Cuadra Fernández had an easy game, and the only mistake he made was awarding Aspas a red card after his celebration. He noticed that and rectified it, so it was a good match for him. 7

Celta Vigo stay in 16th place, and are 8 points clear of the drop zone.

Barcelona do move up to the top of the table, but they may be looking at a 2-point deficit after Madrid play.