Bottom-placed club Espanyol, who recently changed managers, hosted Real Madrid, who could go back to the top of the table if they picked up points. 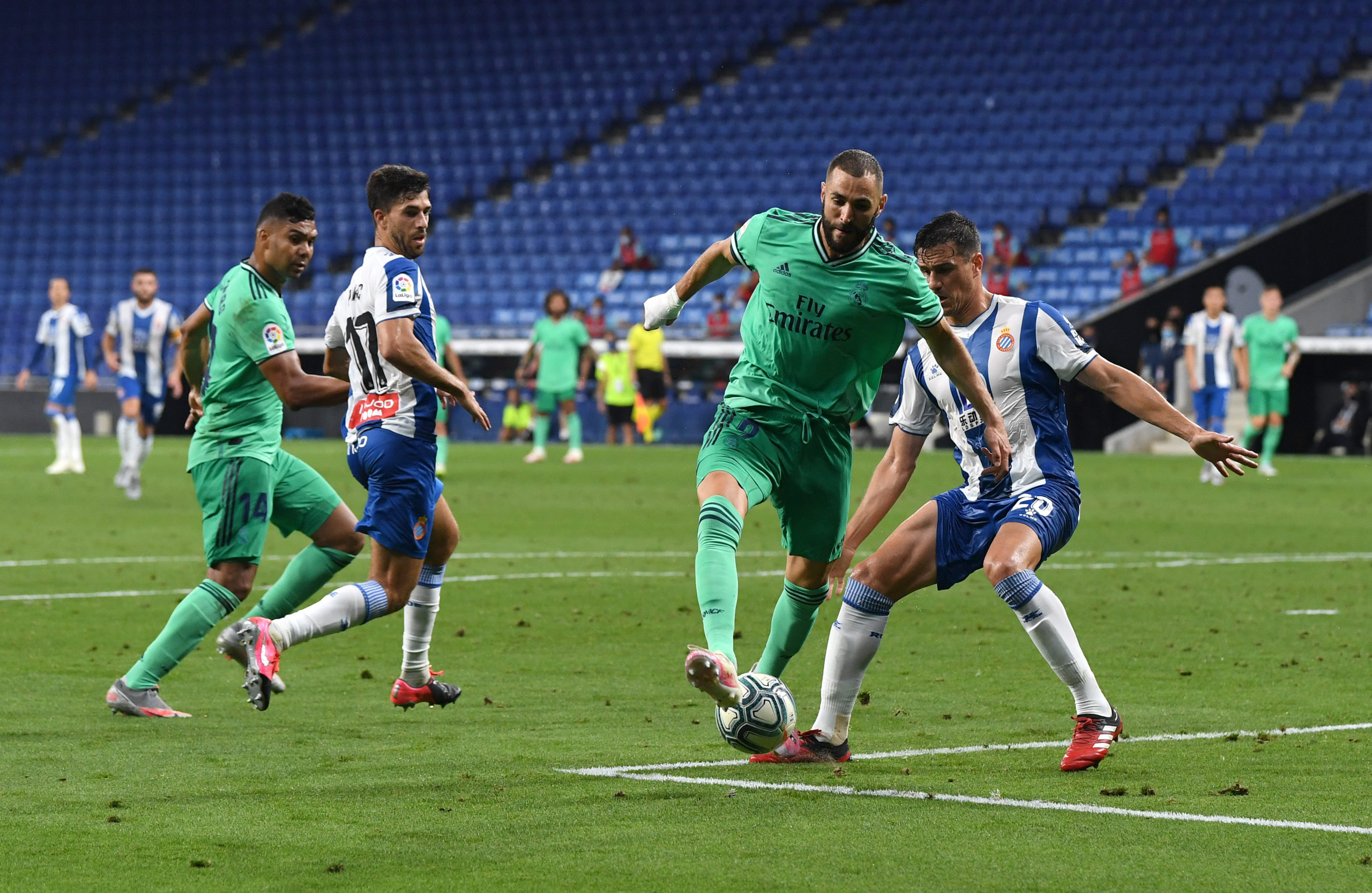 Espanyol started well, but it was Real who had the first big chance. Kroos’ free-kick fell to Casemiro, who rocketed a volley from a tight angle. It was going slightly wide of goal but Ramos got his head to it 2 yards away from goal. However, he missed the target due to its pace.

Real had another chance in the 14th minute when Varane headed a corner on to Casemiro, who missed his header wide.

Wu Lei had a big chance for Espanyol in the 24th minute when he was played through on goal, but he skied his shot.

Then, Benzema had a shot from the edge of the box in the 36th minute, but López tipped it over the bar.

Real had an array of massive chances in the 44th minute as Isco’s cross found Casemiro. His and Benzema’s attempts were turned away, and then Hazard rebound was also saved by López.

A couple of minutes later, all of Espnayol’s hard work was undone. A long ball over the top allowed Benzema to backheel a pass through a defenders legs and to Casemiro, who slotted it home from 6 yards out.

4 minutes into the second half, Gómez found Wu Lei with a cross, but the Chinese international couldn’t get any power behind the shot.

Two minutes later, Casemiro found Benzema at the far post with a across, and the French striker stretched to try to tip it in. However, López was equal to it.

De Tomás tried to bend a low free-kick to the far post in the 65th minute, but Courtois made the save.

With the last touch of the match, Marcelo nearly turned a header into his own net, but luckily it went wide, and so it ended 0-1 to Los Blancos.

As is the norm for teams against Real, Espanyol looked to soak up the pressure and then hit them on the counter, particularly through the pace of Wu Lei. They were set up to be compact as well.

Pau López – Made quite a lot of saves, but couldn’t keep a clean sheet. 7

Víctor Gómez Perea – Defended well, and delivered a couple of good crosses too. 6.25

Bernardo Espinosa – Solid at the back, as he made a few good clearances to keep his side in the match. 6.5

Leandro Cabrera – Did a bit to help out Espinosa in defence, but not a lot. 5.5

Dídac Vilà – Helped out defensively, but didn’t manage anything in terms of attack. 5.75

Wu Lei – Was his side’s greatest attacking threat in the first half as he troubled Madrid’s defence with his pace, but his final product was poor. 6.5

David López – Decent in the middle, but had no impact at either end. 4.75

Marc Roca – Made a few challenges as he helped his defenders, but couldn’t go forward. 5.75

Sergi Darder – Had very little impact on the match. 4.5

Adri Embarba – Didn’t do too much except creating one or two half-chances. 5.25

Raúl de Tomás – Really struggled to get into the match, and didn’t really trouble Courtois. 4.75

Adrià Pedrosa – Decent at the back, but couldn’t help out in attack. 5.75

Óscar Melendo – Showed a few glimpses of quality, but couldn’t create anything substantial. 5.5

Jonathan Calleri – Saw a bit of the ball, but failed to have a major impact. 5

Team – Espanyol started off well, and created a couple of good chances too. But slowly, they were being pushed back by Real. They were really unfortunate to concede in first half stoppage time, as they were very disciplined throughout the half. Even then, they kept things clean at the back in the second half, but just failed to trouble Courtois. Not too bad, though. 5.75

Thibaut Courtois – Didn’t have too much work, but he made a few good saves. His distribution was great too. 7.5

Dani Carvajal – Did a little bit of work in defence, but failed to get forward. 6

Raphaël Varane – Kept things clean at the back. 6.25

Sergio Ramos – Solid in defence, and helped out in attack too. 6.25

Marcelo – Brilliant at both ends of the pitch, as he patrolled the left flank until the last minute. 7

Federico Valverde – Didn’t settle into the match really, but was decent in midfield. 5.5

Casemiro – Brilliant in holding midfield, as he screened his defence very well. Had quite a few shots too, and bagged the winning goal. 8

Toni Kroos – Yet again, he bossed the midfield and pulled the strings from deep. 7.5

Isco – Decent down the right, but he failed to get into the thick of things. 5.5

Karim Benzema – Didn’t have too many chances, but he did superbly well to manufacture the goal. 6.75

Eden Hazard – Created a couple of good chances with his flair, but didn’t have a major impact. 5.75

Vinícius Júnior – Tried to get into the match, but didn’t do too much except picking up a yellow card. 4.5

Rodrygo – Didn’t have a major impact after coming on. 4.25

Team – Real dominated possession yet again, but found it hard to break Espanyol down. Bar the moment of brilliance from Benzema, they really couldn’t fashion a proper opening. At the same time, they kept things clean at the back, and took the victory. 6.25

Antonio Mateu Lahoz had a relatively simple match, and he did the job well. 6.5

Espanyol stay at the foot of the table, and are 10 points away from safety now.

Real Madrid go back up to the summit of La Liga, and have a 2-point lead there.